Leave the World Behind: A Novel 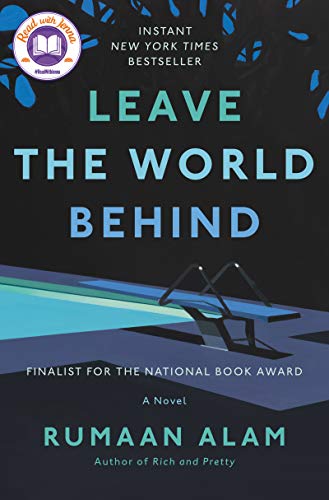 “. . . supremely skilled writing even though the plot goes missing in action early on.”

This is an odd duck of a book, no question about it.

It's for the enjoyment of a very select audience, one who delights in the sheer giddy pleasure of the imaginative way words follow each other on the page. Another niche audience would be one who enjoys books with words and references that send them to the dictionary or the Internet: ossified, synecdoche, Ariadne's thread, etc.

The inciting incident that kicks off this story is something that could happen to anyone, but probably hasn't so it's an intriguing one.

Clay takes his wife Amanda, son Archie, and daughter Rose are on a vacation road trip. It's a delightful sunny day, but the landscape out of New York City isn't particularly eye-appealing:

So it's with eager anticipation the family heads to their rented vacation house in a remote corner of Long Island. Upon arrival they are more than pleased with the house Amanda found on the internet. It's the kind of house where you take off your shoes at the door:

"The house had that hush expensive houses do. . . . The floors were wide-plank wood harvested from an old cotton mill in Utica, so flush there was nary a creak or complaint. The windows so clean that every month or so some common bird miscalculated and perished broken-necked in the grass. Some efficient hands had been here, rolled up the blinds, turned down the thermostat, Windexed every surface, run the Dyson into crevices of the sofa, picking up bits of organic blue corn tortilla chips and the errant dime. . . .

". . .pendant lamps hovering over the oak table . . . the gray marble kitchen island where you could imagine kneading dough, the double sink beneath the window overlooking the pool, the stove with its copper faucet so you could fill your pot without having to move it."

After settling in for the evening, they find the TV, internet and their cell phones are gradually going wonky and eventually stop working altogether.

Clay and Amanda wonder who it could be, of course, and Amanda freaks out a little—"Get a bat." But Clay eventually opens the door. It's a man and a woman, older, the owners of the house who ask to come in because there's been a blackout in the city and they had to leave their apartment on the 14th floor of a high-rise, though the author takes several pages for them to get to the point.

What follows is a lot of talk that amounts to a juxtaposed conversation about what was actually happening with what the point of view characters think is happening. During it all Amanda remains suspicious at the sudden unexpected appearance of the owners, and it's about here the plot takes wing.

And speaking of point of view characters, POV purists will wince and shudder at the head-hopping throughout.

This book has been marketed as suspenseful and an examination of race. It's not all that suspenseful in the usual sense of the word when discussing genre, and there is nothing provocative in it about race, either. The owners of the house are Black, but race does not enter into any of the story conflict.

Several reviewers have praised this book for the depth of characterization, and the author certainly digs deep into the mind and internal narrative of the main characters. Maybe more than readers want or is necessary. There is, after all, a limit to how much anybody wants to know about the sexual activities of their family and friends, let alone strangers.

Details, sexual in nature, take up quite a bit of narrative, especially in the beginning pages. Readers are taken so deep into the heads of some characters they are forced to witness things that most people would never want to be witnessed by strangers. Clay, for example, seems obsessed with the sexuality of his own body. But does anybody really want to read about it, bodily fluids and all?

There's a famous quote about sexual activity that goes: “I don't care what people do as long as they don't do it in the street . . ." That kind of applies here. Deep characterization is one thing. Window peeping is another. No doubt some readers will want to leave Leave the World Behind behind.

Nevertheless, it's worth a read for the supremely skilled writing even though the plot goes missing in action early on.