Leave Out the Tragic Parts: A Grandfather's Search for a Boy Lost to Addiction 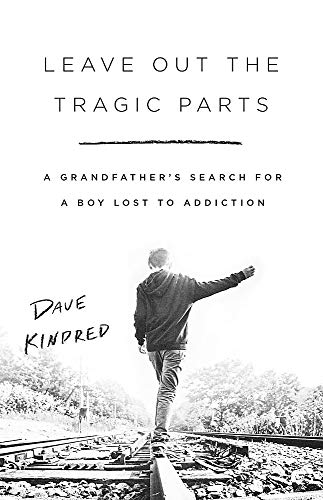 The haunting words written above by author Kindred and felt in his core aptly describe the emotional despair he experienced at trying to solve the issue of alcoholism in his beloved grandson Jared. When Jared turned down yet another offer for a free rehabilitation program a hospital administrator stated, “The mistake we make with addicts is thinking they have any logic.”

In the words of another hospital administrator, “There is a logic to it, only it’s a logic of despair. He explains that “Jared said no for two reasons. One is that going through withdrawal is physically, mentally, psychologically and spiritually painful. The other part is the outright fear of living without the chemical, not being able to cope without it.”

Leave Out the Tragic Parts is an emotional and psychological voyage into the psyche of a grief-stricken grandfather. He describes the minute details of the life Jared had chosen as a young hobo under the nickname Goblin. His life consisted of riding the rails (slang for railroad cars) across the country and sharing adventures coupled with a constant supply of alcohol alongside like-minded compadres with names such as Stray, Booze Cop, Aggro, and myriad others.

Life was both carefree and horrific all at the same time. In one particularly grisly incident while running across a highway, a speeding car barrels directly into Goblin and causes six gigantic fractures. In addition, according to the hospital report, “his liver was sliced apart, his bladder ripped open.” He was extremely lucky to be alive. But even this horrendous event did not alter his lifestyle.

According to author Kindred, “Jared had created his preferred life, a wanderer’s life, at home nowhere and everywhere. He had chosen to live on the streets of the nation’s capital and then wherever the winds of whim took him.”

One of the most intriguing aspects of the book is how author Kindred strategically intersperses direct accounts of Jared’s friends from their shared lives on the road within the narrative. All of them had spent time with him and each other, which they viewed as both memorable and enjoyable. Each of them admired Jared’s free spirit, sense of humor, kind heart, and willingness to help others in need.

Because of the intensity of the subject matter as well as the proximity of the family members written about in Leave Out the Tragic Parts, it must have required a great amount of courage and intestinal fortitude on the part of the writer.

Though his deep and unconditional love for his grandson may have contributed to some denial about Jared’s illness early on in the disease, eventually he came to have a deep understanding of the entire process. As a result of his appreciation and acceptance of what took place, readers are also led to have a deeper understanding of the addictive and debilitating disease of alcoholism.

In another sector of his career, Kindred is a nationally acclaimed sports writer. Thus it is appropriate to say that in sports vernacular, many readers will view Leave Out the Tragic Parts as a true home run.

Laura Schultz is a freelance writer and has been a licensed Marriage and Family Therapist for over 25 years specializing in addiction and family systems. For several years, she worked in a residential treatment center for alcohol and drug addiction. In addition she has published articles on eating disorders, myriad other addictions, depression, and anxiety.