The Least of Us: True Tales of America and Hope in the Age of Fentanyl and Meth 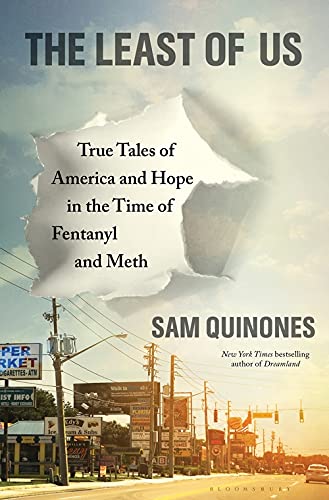 “The Least of Us confirms his place as a leading chronicler of an American nightmare.”

In his award-winning Dreamland (2015), former Los Angeles Times reporter Quinones sounded an early alarm about America’s opioid epidemic. Now he continues the story with The Least of Us, a welcome survey of the damage caused by the prescription painkillers and the new challenges posed by the widely available synthetic drugs fentanyl and meth.

Sprawling and episodic, his new book follows the epidemic of addiction to synthetics into cities and small towns. No longer limited to the Rust Belt or Appalachia, this addiction now wreaks havoc in “well-heeled suburbs of Orange County, suburban Charlotte and Indianapolis, Fort Lauderdale,” he writes.

Fentanyl, far more powerful than morphine, has become the deadliest illegal drug in the nation’s history, writes Quinones. Street dealers now use it as a convenient additive to cocaine, resulting in many overdose deaths.

At the same time, new Mexican traffickers are making cheaper, stronger methamphetamines that leave users with symptoms of schizophrenia. The new meth has boosted the U.S. homeless population.

He finds many of the new American meth users started their addictions with prescription pain pills.

How did we get here?

The shadow of the Sackler family, owners of Purdue Pharma, looms over this entire book. The story of their aggressive marketing of the narcotic painkiller OxyContin is told more fully elsewhere, but Quinones lends a very sharp bite to his version.

He details the 2013 “fragrant journalistic love letter” coverage Vogue magazine gave to Jacqueline Sackler’s remodeling of the family’s country home in East Hampton. Ms. Sackler is married to the younger Mortimer Sackler, a Purdue Pharma director. Under her guidance, architects and designers gave a bright “unfussed with” look to the estate. This was in sharp contrast to their Manhattan home, a “showcase for [the couple’s] serious adventures in contemporary art.”

“Victims of the emerging national opioid-addiction epidemic, meanwhile, led ashamed and voiceless lives far from the lush gardens of the Sacklers’ East Hampton summer estate,” writes the author. “American families kept quiet as their loved ones grew addicted to the pills that funded those art-collecting ventures.”

By 2015, drug overdose fatalities each year surpassed the total of American deaths in the Vietnam War. The families of overdose victims began to find a voice in reporting by Quinones and others.

“OxyContin sales fell, along with Purdue’s annual payouts to the Sackler owners. Far from being chastened, the company doubled down. It increased the doctor visits that their sales reps had to meet to one million in 2018, almost twice the goal during the banner year of 2010.”

Critical media coverage of the family ensued. Soon, all Sacklers resigned from Purdue’s board. They never accepted responsibility for the opioid epidemic.

Quinones also offers insightful chapters on our growing understanding of addiction through advances in neuroscience, the invention of a molecule more efficient than morphine (fentanyl), and the similarities between drugs of abuse and “addictive-like eating.”

The Least of Us does a fine job of detailing the devastation wrought by the synthetics that now dominate addiction. Alas, there may be too many stories. His tales of addicts and their families have a scattershot effect, losing their power as they pile up one on another. Several longer stories offer an in-depth account of situations but are told in interspersed instalments that are hard to follow.

Even so, the author provides a terrifying close-up view of addiction and its toll in disparate communities. He finds hopeful signs in the rise of drug courts, which get addicts into treatment, and in the many efforts to bolster community in otherwise bleak and isolated settings.

Quinones was one of the earliest reporters to tackle the complexities of the ongoing drug crisis. Together with his earlier Dreamland, The Least of Us confirms his place as a leading chronicler of an American nightmare.