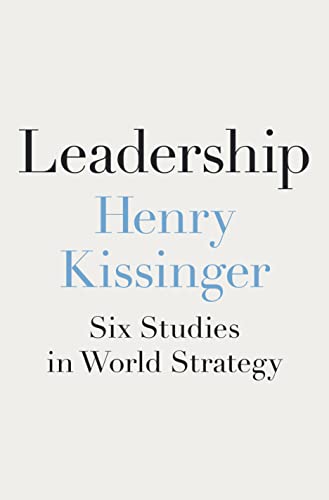 “In his 99th year, Henry Kissinger . . . continues to contribute to our understanding of the world.”

Henry Kissinger is one of our country’s greatest scholar-statesman of the past seven decades. In his 99th year, Kissinger has written yet another book on foreign policy that is a must read. This new book assesses the qualities of six leaders whose worldviews were shaped by the Second World War and the Cold War.

Germany’s Konrad Adenauer, France’s Charles de Gaulle, America’s Richard Nixon, Egypt’s Anwar Sadat, Singapore’s Lee Kuan Yew, and Britain’s Margaret Thatcher emerged from lower-to-middle-class roots to be leaders of their respective countries during very turbulent times. Kissinger is obviously most familiar with Nixon—having served as Nixon’s top foreign policy adviser—but he had personal interactions with all of the subjects of this book.

Kissinger notes the most memorable accomplishments of these leaders. Adenauer carefully navigated Germany’s post-World War II revival in the aftermath of the country’s international aggression and its genocidal policies. De Gaulle brought back honor and a semblance of greatness to his country after its humiliating defeat in World War II. Nixon ended a divisive war, successfully exploited the Sino-Soviet split to America’s benefit, and drastically diminished Soviet influence in the Middle East. Sadat courageously made peace with Israel. Lee transformed Singapore from a third-world economy to a thriving capitalist dynamo. Thatcher reinvigorated Britain’s economy after decades of socialist stagnation.

Kissinger notes that the six subjects of this book exhibited different styles of leadership, but all “fit means to ends and purpose to circumstance.” None of the six leaders were ideologues, but all were pragmatic conservatives who understood power and its limits. Kissinger, too, has never been an ideologue but has always favored a pragmatic, realpolitik approach to international relations. His senior honor’s thesis at Harvard was a reflection on Spengler, Toynbee, and Kant. His doctoral dissertation was a study of the statesmanship of Castlereagh and Metternich.

Kissinger’s first two books were about restoring the European balance of power after the Napoleonic Wars (A World Restored) and integrating nuclear weapons into American foreign policy (Nuclear Weapons and Foreign Policy). As Nixon’s National Security Adviser and Secretary of State, Kissinger eschewed ideology, grounding policy on the pursuit of U.S. interests within the limitations imposed by geopolitical realities. His later books Diplomacy and World Order are seminal assessments of both historical and contemporary statecraft.

But to truly understand and appreciate Kissinger, you also need to read his three-volume memoirs: White House Years, Years of Upheaval, and Years of Renewal. These are among the greatest memoirs of any American statesman. They show how statesmen and diplomats operate in the real world as opposed to the theoretical frameworks of international relations scholars. And in Leadership, there are echoes of the portraits of statesmen Kissinger wrote about in his memoirs.

Kissinger’s Leadership is in some ways similar to Richard Nixon’s post-presidential book Leaders, which makes one wonder whether Kissinger modeled this book on Nixon’s book. Nixon in that book included assessments of de Gaulle and Adenauer, and added chapters on Churchill, Douglas MacArthur, Shigeru Yoshida, Nikita Khrushchev, and Zhou Enlai. Both books show that Nixon and Kissinger believed that the best way to explain and describe leadership (which can be a rather vague term) is to study how individual leaders responded to the challenges of their time.

In his 99th year, Henry Kissinger, like George Kennan before him (who died at the age of 101), continues to contribute to our understanding of the world. His books—including this one—will hopefully be read well into the future. Indeed, our present and future leaders would benefit from reading all of Kissinger’s books. They are timeless.