The Lawyer Bubble: A Profession in Crisis 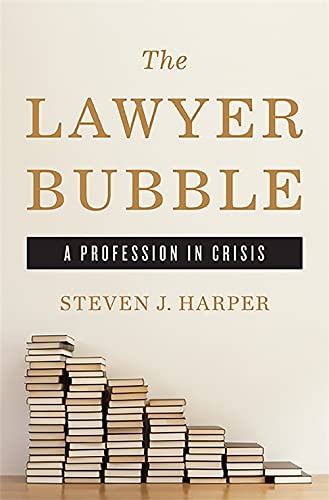 One wonders if author Steven J. Harper gets invited to many parties these days. As the author of the Belly of the Beast blog—an American Bar Association (ABA) Best of 2010 Blawg 100 winner—and outspoken critic of the current state of the legal world, Mr. Harper is known for his vocal opinions on the state of the profession in the U.S.

And with the release of The Lawyer Bubble, it seems safe to assume that Mr. Harper’s social card will be even less in demand.

Which is a good thing for the rest of us.

Because Steven J. Harper is a seasoned insider unafraid to say what many other lawyers in his position might: that the “once-noble profession is just another business.” Not only that, it’s a business in turmoil.

In some ways The Lawyer Bubble is two books in one: The first half deals with the law schools that created the eponymous bubble, while the second half deals with big law firms that pile onto it. Both are written with keen insight and scathing accusations.

This is partly due to the promises that law schools offer in perceived prestige and job security. But The Lawyer Bubble notes that reality is vastly different than the glossy brochures might promise.

This is because 45,000 new lawyers are created, each averaging over $100,000 in debt. If there was a high demand for these 45,000 lawyers, that wouldn’t necessarily be a problem. The reality, however, is that there will be “only 73,600 new legal jobs created over the next decade.”

In June 2012 the ABA revealed that nine months after graduation, only 55% of the employed 2011 law school graduating class had jobs that required a legal degree. Only 10% of all law schools have overall employment rates of over 80%.

This leads us to the remainder of the book, which dissects a number of law firms, with the most attention given to the outsized egos and poor decisions at the now defunct Dewey & LeBoeuf. Dewey once boasted over 1,000 attorneys across 26 global offices and had over a 100-year history (it began as the venerable firm, Dewey Ballantine, in 1909).

When Dewey & LeBoeuf declared bankruptcy in May 28, 2012, it sent shockwaves throughout the legal industry, not just because 1,000+ attorneys and legal support staff that were suddenly available on the open market, but also because of the law students that were once promised jobs and now had to scramble for alternative work. And the story as to how the firm fell so hard and so far is worthy of any soap opera.

As a former litigator, Mr. Harper brings his analytical and persuasive abilities to bear in a highly entertaining and riveting narrative. If there is a complaint about the book, it is that there is scant mention of Mr. Harper’s own firm of Kirkland & Ellis, which may simply be because it was not as culpable as other large firms.

Still, the lack of any meaningful discussion of where Steven J. Harper spent a quarter of a century in employment is a bit curious.

Overall, The Lawyer Bubble is recommended reading for anyone working in a law related field. And for law school students—especially prospective ones—it really should be required reading.