The Law (in Plain English) for Photographers 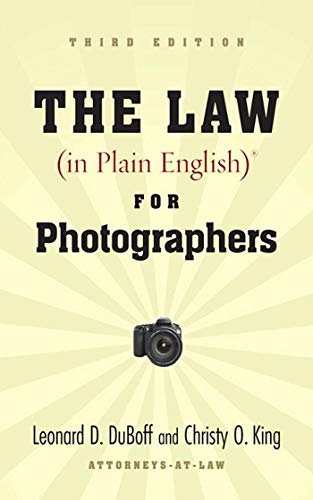 The New York Times recently had an article entitled “For Photographers, the Image of a Shrinking Path” (March 29, 2010) that detailed how digital photography has changed the world of professional photographers. When professional-level camera equipment can now be had for a fraction of what it would have cost a decade ago, it seems obvious that professional photographers have to now contend with a bevy of amateurs selling their shots for fractions of what a professional would charge.
But Newton noted long ago that for every action there’s an equal and opposite reaction. In this case, while professional photographers see their livelihood at risk, hobbyists are now looking at their pastime as a means for incremental income—and for both of these groups, The Law (in Plain English) for Photographers is a must have in the library.
It’s not really a book to be read through in one sitting; rather, it’s a reference manual for anyone serious about photography: from those hobbyists seeking to take that next step to professional photographers that feel it’s time to deal with the decidedly un-artistic aspects of the profession.
Starting with intellectual property concerns, The Law covers issues of copyright, publicity, privacy, defamation, and libel that are confusing to even many lawyers. But beyond these somewhat esoteric aspects of the law, The Law goes further and deals with other, more mundane aspects of the law and photography including chapters entitled:
· Organizing as a Business
· The Tax Consequences of Business Organization
· What to know about Leases
· Contracts and Remedies
· Stock Photography
There is even a chapter entitled “Estate Planning,” which seems out of place in the book, as it is an aspect of the law only marginally related to the field of photography. And there lies the book’s strength and weakness: it really does try to explain the law—as much of it as possible—to the photographer. And while the beginning chapters are quite interesting, the later chapters are far drier due, no doubt, in large part to the subject matter. To their credit, the authors attempt to distill reams of tax law into as readable prose as possible. But, as noted earlier, it really isn’t meant to be read in one sitting; rather, it is best suited to be a reference for a particular topic and to that end, it succeeds.
Moreover, while it’s geared toward photographers, the truth of the matter is that it’s so detailed and—true to the parenthesis in the title—written in simple-enough English as to be useful for any small business interested in understanding the law a little better.