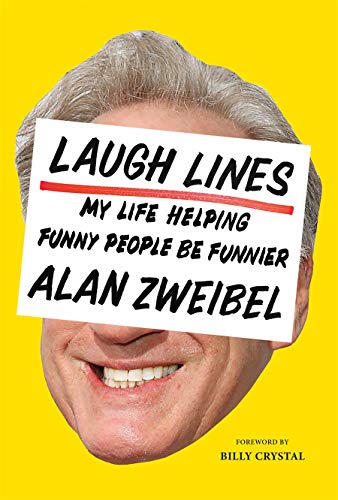 “a well-written, enjoyable, often rambling, and funny memoir by an accomplished comedy writer.”

Back in 1972, at 22 years old, “They have a new thing now called sperm banks. It’s like an ordinary bank except here, after you make a deposit, you lose interest,” was one of the first jokes Alan Zweibel attempted to sell, for seven dollars, to an aging comedian at a resort in the Catskill Mountains.

His parents wanted him to become a lawyer; he wanted only to become a comedy writer. Fortunately, he did poorly on the LSATs.

Zweibel wanted a chance at standup, “So I took the jokes the Catskills guys wouldn’t buy from me and structured them into what I believed were six coherent minutes . . . at Catch a Rising Star.”

During the day, he worked in a deli, slicing meats and cheeses.

The iconic Lorne Michaels caught his act at one of the clubs while Michaels was sourcing acts for a new comedy show, Saturday Night Live. Zweibel landed that gig in 1975 and was able to leave the deli business. That gig lasted five years.

After meeting Gilda Radner, among all the original cast members at their first ensemble session, she asked him, “Can you help me be a parakeet?” They became platonic friends forever.

Zweibel began to write the Samurai sketches that John Belushi made famous. He moved on to “Weekend Update.” As he says, “Success snuck up on us.”

Also, “I remember Gilda getting a stack of eight-by-ten glossy photos, so she no longer needed to lay her head down on a Xerox machine . . .”

Zweibel started dining with everyone who was anyone. At a dinner at the famed Russian Tea Room, Radner handed her brother’s credit card, under the table, to Zweibel, and insisted he “pay” for the dinners of Candice Bergen, Paul Simon, Art Garfunkel, among many other celebs.

In 1976, SNL won four Emmy awards and as Zweibel described the feeling, he no longer had to sit at the kids’ table. He went from slicing lox in a deli to winning an Emmy award in less than a year.

Zweibel met his wife, Robin Blankman, while she was a production assistant on the show during its third season. They married in 1979. He left the show after its fifth season when rumor had it that Lorne Michaels was leaving as well.

While offers came in from Los Angeles, Zweibel, who now had two children, chose to remain in New York City, until an opportunity arose in L.A. to work on a Garry Shandling comedy special for Showtime. They eventually had a third child while living in L.A.

He was unsure of their first meeting, when Shandling phoned him at 1:00 a.m. with, “Alan, my dog’s penis tastes bitter. You think it’s his diet or what?” He then knew he could work with Shandling.

When It’s Garry Shandling’s Show became a huge hit, Zweibel moved his family to Brentwood, California, even though they had just bought a home in New Jersey.

Gilda Radner married Gene Wilder but was soon diagnosed with ovarian cancer. When she passed, Zweibel was a pallbearer and delivered a eulogy.

Zweibel went to work writing for Castle Rock, where Rob Reiner was a partner. He shared offices with his old friends from New York, Larry David, and Billy Crystal. Reiner, eight years later, bought the movie rights to a book Zweibel had written, called North.

North bombed, causing Zweibel a serious case of writer’s block, for which his friend, Dave Barry advised, “I do the same thing I do to end constipation . . . Just sit there until something comes out.”

He became unblocked with a book he wrote as a tribute to Gilda Radner, called Bunny, Bunny, which grew into an off-Broadway play. He then worked with Billy Crystal on the Tony award-winning 700 Sundays.

He met Dave Barry at an awards ceremony for Steve Martin in 2005. Barry and Zweibel co-wrote a comedic novel, Lunatics. Barry invited Zweibel to become a member of a band of celebrated writers, called the Rock Bottom Remainders. They are “Writers who spend their working hours alone getting together to do something other than writing.”

Some members have included Amy Tan and Stephen King and they have appeared at the Rock & Roll Hall of Fame, though most members claim they cannot sing.

Zweibel is long-winded in his descriptions at times, but Laugh Lines is, overall, a well-written, enjoyable, often rambling, and funny memoir by an accomplished comedy writer.