The Latter Days: A Memoir 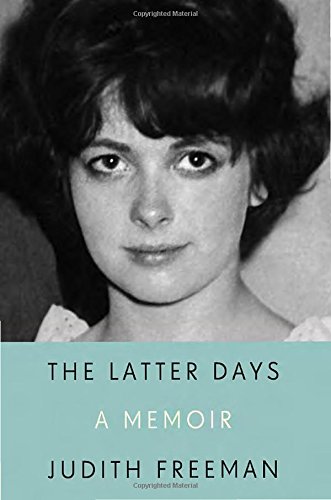 Born into a community of devout Mormons, it's only when she starts kindergarten that Judith Freeman realizes different lifestyles exist in the outside world: It's apparently full of heathens and other interesting people.

A feisty child, unafraid of bullying boys or of speaking her mind, Judith quickly gains a reputation for being a bit of a rebel. Even as a small girl, she complains about having to tithe 10 percent of her hard-earned chores money to the rich and powerful church: "and we're talking about gross income, not net," she recalls. "God gets his money before Uncle Sam."

The fact that she's the only one in her large family to have been born in a Catholic hospital adds to Judith's feelings of being an outsider. Later, when she asks her mother why—the Catholic Church was, after all, openly referred to as the Church of the Devil by most Mormons—she's told "it was brand new and I wanted to try it out."

That still doesn't explain her name.

"Judith, a Hebrew name from the Old Testament, one favored by Jews. Judith who seduced Holofernes, luring him to her tent only to cut off his head in order to save her people.

"A Catholic hospital. A Jewish name. A wrathful sword-wielding woman. How did they imagine I'd turn out?"

Despite the usual bumps along the way, including an almost unbearably large one with the birth of a child whose health was so fragile it was touch-and-go whether he'd even survive, how she eventually turned out doesn't seem so bad at all.

Married at 17 to her sister's older ex-boyfriend, life back then for the now-successful author seemed set for disaster, particularly when her little boy was born blue, his color caused by a lack of oxygen due to a malformation of his heart, a transposition of the great arteries.

Eventually, and after much uncertainty "he is among the first children with a transposition to survive after undergoing a recently invented surgery to reconfigure the inside of his heart since the arteries themselves cannot be switched . . . He will be a pioneer, the heart surgeon says: If he survives he will be a model for what is possible. Since I come from a long line of pioneers, this somehow seems appropriate," she writes.

Almost inevitably, as the subsequent strain on her marriage takes its toll she falls into an affair with the married surgeon—a sophisticated, older, wealthy man who was born in Europe, speaks five languages, and wears shirts with his initials monogrammed on the pockets.

"He is as foolishly in love with me as I am with him," she writes, offering no excuse nor any explanation.

It's a disconnect that's present several times through the course of this memoir; a disconcerting distance between herself and her story, almost as though she's telling someone else's tale. An editing shortfall, perhaps, rather than any failing in the actual writing, it's occasionally frustrating for the reader.

Her son survives, though her marriage and her faith do not, and by age 22—having packed in more experiences than many people do in a lifetime—Judith decides she will become a writer.

Raised in Ogden, Utah, 30 miles from Salt Lake City, Judith is the sixth child and second girl in the Mormon family into which she is born. There are two more boys born after her. Luckily, her mother loved babies.

Theirs wasn't a particularly big family by Mormon standards: although there is no prohibition on birth control for members of "The One True Church," some of their neighbors had broods of 11 and 14.

"Children are like special gifts to Mormons who believe not only in an afterlife but in a pre-existence as well," she says, "an ethereal realm where souls are lined up as if in a crowded celestial waiting room, waiting for a chance to pass through the veil and come into this world. To create a baby is to open the heavenly portal and let a spirit pass through."

Having any children at all was to her father's apparent regret. If he hadn't had them, he might have become a real musician, he tells her "when I was old enough to appreciate such a comment, and also be stung by it. What child wants to think she kept a father from his dreams?"

A harsh, sometimes verging on cruel, taskmaster, and a devoted Mormon, her father was one of a kind. A drum-playing liberal Democrat in a largely Republican environment, he was given to wearing colorful clothes—"he never met a pair of plaid pants he didn't like"—and natty hats.

Evil, he once told her, came into the world with syncopation, "because that's when people started moving their hips."

By no means a history of her family's chosen religion, nor any excuse for the lifestyle choices the author makes along the way, her memoir nevertheless contains some fascinating tidbits about both.