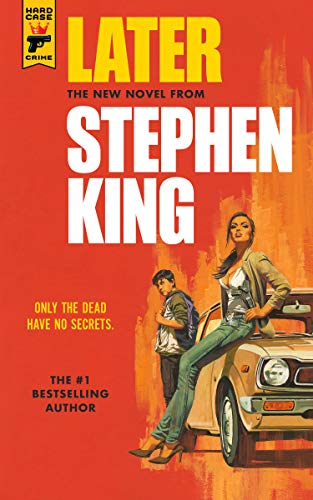 “Later is yet another example of Stephen King’s special ability to tell a story that’s both simple and compelling.”

While on the publicity circuit to promote Later, his new novel, bestselling author Stephen King provided a glimpse into the workings of a fertile creative mind as he described the manner in which the various pieces of this story came together.

His starting point, as he explained in several interviews, is the dilemma faced by literary agent Tia Conklin when her best client, her meal ticket and primary means of avoiding financial ruin, suddenly dies before completing his magnum opus. What could Tia possibly do to stave off disaster?

Okay, then. What if, King supposes, her young son Jamie could talk to the dead? And what if the dead were compelled to answer any questions Jamie asked them? Could the boy communicate with the deceased author to find out how he intended to complete his novel? Would this enable Tia to finish the manuscript in secret, pass it on to the publisher, and rescue herself and Jamie from impending bankruptcy?

At this point in the creative process, King explained, he had progressed from an idea kicking around in his head to a story that he knew would work.

While Stephen King has published over 60 novels, Later is the third title he has written for the Hard Case Crime imprint, following up on The Colorado Kid (2005) and Joyland (2012). And while Hard Case’s primary mission is to reprint old crime fiction classics, supplemented by new original novels from selected authors, it’s understood that King has carte blanche to develop his ideas in whatever direction feels right to him.

As a result, as his young narrator Jamie repeatedly tells us, “this is a horror story.”

And a good one, at that. Jamie Conklin is the latest in King’s roster of young protagonists with special abilities, reaching back to Carrie White (Carrie, 1974), Dannie Torrance (The Shining, 1977), and Charlie McGee (Firestarter, 1980), to name only a few. King enjoys writing from the perspective of troubled young people, and it seems almost therapeutic for author and readers alike when the powers of these vulnerable characters are somehow instrumental in their ultimate vindication in the face of great evil.

Later is told from Jamie’s point of view as he looks back at the past from the lofty perspective of a young adult describing formative events in his childhood. King’s structure, which jumps back and forth a bit along the timeline, is somewhat disjointed as a result of this retrospection, but not fatally so.

King has alternated over the course of his career between third-person and first-person narrators. When he takes the former approach, it has resulted in some excellent work, especially Firestarter, one of his best-written novels, and of course The Shining.

However, when he chooses to use a first-person narrator, as he has here in Later, the results are sometimes rather tinny, as he attempts to mimic the voices and thoughts of young people (adolescent males in particular) without really having a good ear for it. The reader must pass through a gauntlet of fart jokes and prurient fascinations—a style unfortunately imitated by many King admirers—in order to get to the good stuff centering on their special abilities and the threat they must face.

Thankfully, Later keeps this kind of thing to a minimum, allowing us to dwell on Jamie’s relationship with his mom, his dislike of her girlfriend (bad cop Liz Dutton), and of course his interactions with the recently deceased. The story’s quite readable in this regard, and Jamie is a very likeable protagonist.

Readers should note as well that Later is not quite a standalone story. While the characters and situations are new, Jamie’s communications with the dead become complicated when he encounters a malevolent being inhabiting a dead person in the form of what he describes as “deadlight,” something “bright and dark at the same time . . . something from outside the world.”

Those familiar with King’s work will recognize this phenomenon as a thread connecting several of his stories, including It, The Dark Tower, and others. In this case, it’s a thread that gives the story added elements of suspense and mystery.

Finally, a review of a Hard Case Crime title is never complete without remarking on the book design, directed here by Max Phillips. Stephen King is known to favor this imprint not only because of its growing library of reprinted classic titles from Erle Stanley Gardner, James M. Cain, and Donald E. Westlake, but also because of the care and attention to detail paid to the look and feel of the book by this publisher.

Later features an original cover painting by Paul Mann, a 40-year veteran of the business whose illustration perfectly captures the atmosphere of a vintage paperback novel. At the same time, the fonts chosen for the interior, and the division of chapters in the middle of a page to minimize white space (as well as printing costs, back in the day), maintain the ambiance of the book throughout.

Later is yet another example of Stephen King’s special ability to tell a story that’s both simple and compelling. Entertaining and thought-provoking, it’s a must-add to your 2021 reading list.