The Last White Man: A Novel 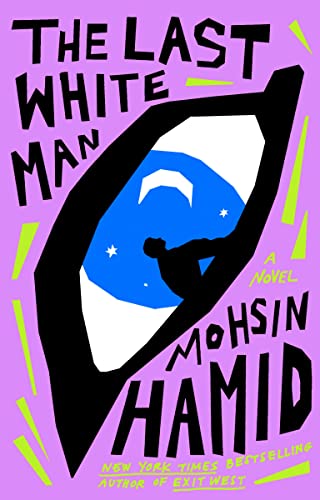 “The Last White Man works as a kind of message-heavy fable . . .”

Mohsin Hamid (Booker Prize finalist for Exit West) opens his new book much like Kafka’s Metamorphosis. Only instead of his main character, Anders, waking up to find himself transformed into a giant cockroach, Anders discovers something almost as disturbing:

“One morning Anders, a white man, woke up to find he had turned a deep and undeniable brown.”

The premise is arresting, forcing a white man to literally experience the world as a person of color. And clearly that’s what Hamid is trying to do, force empathy on his characters as well as raising questions about white privilege. But the book ends up feeling like a message delivered in a story rather than a powerful story in itself. The characters and plot all feel like tools created to serve the message rather than driven by any inherent narrative meaning with the message more subtly (and hence more powerfully) conveyed.

It would have been more effective if Anders still looked like himself, only with darker skin. But in fact, although his general build remains the same, his face and expressions are also different, though somehow his voice doesn’t change. This, of course, is a much more troubling experience, raising all kinds of questions about identity. If you don’t recognize your own eyes in the mirror, are you really you? Is Anders in someone else’s body, a kind of literary Freaky Friday? Who is the person he’s become? Whose body does he have? Anyone would be uncomfortable waking up with a strange face, even if the face were younger, more attractive, “better” somehow than our original face. Because there is a mind-body connection and we exist as our physical selves, not simply spirits slipped into a convenient envelope.

When Anders’ girlfriend, Oona sees him, she immediately recognizes the depth of the situation, though the implications aren’t delved into any further than in this paragraph:

“. . . so she told him what she thought, flat-out, that he looked like another person, utterly different, and that anyone who saw him would think the same, and it was hard, but there it was.”

Anders doesn’t seem to dwell on it, this strangeness, and when Oona herself changes (as does everyone eventually, up to the last white man), she sees the change as nowhere near as disruptive:

“Oona went to the mirror and saw a stranger, but a complete stranger only for an instant, wondrous, that mouth, those eyes, and then a stranger Oona had met, a stranger who was growing familiar, whom Oona greeted with a steady gaze, and who gazed steadily back, until they both smiled the smallest of smiles, Oona and this dark woman together, this dark woman who was so recently a stranger and who was Oona, undeniably Oona, too.”

Hamid thus dodges the question of personal identity to focus on skin color. It makes his message more direct but immediately makes his characters more one-dimensional. They are simply white people who are becoming brown. Both Anders and Oona have racist parents who accept their brown children but see the world as clearly divided into white and brown, good and bad. In fact, there are no white characters who aren’t racist, unless Oona counts. Anders himself recognizes his white privilege once he loses it.

Strangely, however, this change to Anders brings him and Oona, who previously had only a superficial relationship, much closer. The meaning is obvious: They see each other more clearly, now that they’re looking more deeply, beyond the surface. Not exactly a subtle message, but there is nothing subtle in this book.

The chapters are short, the action keeps moving, so the story is a quick, easy read. But surprisingly for the depth of Hamid’s earlier works, this is pretty thin stuff. There are occasional flashes of insight, but they’re glints in the constant hammering of the message.

“Anders said that he was not sure he was the same person, he had begun by feeling that under the surface it was still him, who else could it be, but it was not that simple, and the way people act around you,  it changes what you are, who you are, and Oona said she understood, that was like learning a foreign language, and when you tried to speak a foreign language, you lost your sense of humor, no matter how much you tried, you could not be funny the way you used to be. . . .”

People who are fluent in other languages may argue this point: Making and getting a joke in a foreign language is a mark of how well you know the language. But certainly different languages shape how you talk and think about things. Perhaps that’s what Hamid really means. But the inference that we change who are in response to peer pressure is troubling. Developing a sense of self should go much deeper than caring about what others think of you.

But this isn’t a story about self-identity. It’s not even about white people losing their privileged status, though there are moments of chaos and violence. Perhaps this is Hamid’s way of imagining a truly color-blind future. The Last White Man works as a kind of message-heavy fable, a puddle of a book rather than a deep dive.