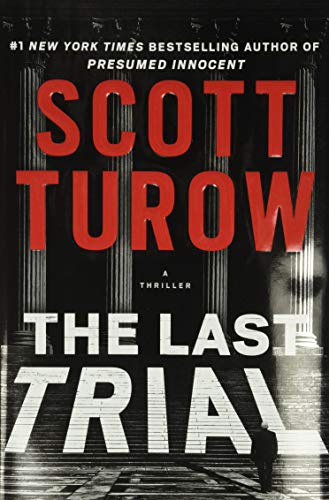 “The Last Trial is another excellent courtroom drama by a proven master of the legal thriller.”

When does a prominent criminal defense lawyer who’s now 85 years old know when he’s finally arrived at his last trial? Is it when he begins to make tactical errors that infuriate the judge and his long-time partner, who’s also his daughter? Is it when his client, a very old friend responsible for saving his life, tells him lies that not only interfere with their defense but rock the very foundation of their relationship?

Alejandro “Sandy” Stern has had a long and distinguished career practicing law in Kindle County, but his final client may prove to be the most difficult of all. Dr. Kiril Pafko is a former Nobel Prize winner in medicine whose miracle cure for cancer may be responsible for an unacceptable number of deaths. Charged not only with fraud and insider trading for dumping stock just before the publication of a damning news report, Kiril also faces murder charges for the deaths of patients taking the drug.

Can Stern find his way through the maze of lies, regulatory ambiguities, and personal betrayals to acquit his old friend of all charges in his final appearance before the bar?

The Last Trial is Scott Turow’s latest Kindle County legal thriller featuring Sandy Stern. Turow’s previous titles, which should occupy their own wing in the legal thriller hall of fame, include Presumed Innocent (1987), which won a Silver Dagger Award and was adapted into a well-known film starring Harrison Ford and Brian Dennehy; The Burden of Proof (1990), a Sandy Stern novel and television mini-series starring Hector Elizondo and Brian Dennehy; and Reversible Errors (2002), a Kindle County novel that became a made-for-television film starring Tom Selleck and William H. Macy.

Turow is also a practicing lawyer with experience in tax fraud and corruption litigation, as well as criminal law, and it shows. Readers have come to expect a high degree of verisimilitude in his fiction, and The Last Trial is no exception to the rule.

But where legal procedure and jargon may often become complex and difficult to follow, Turow ensures that his courtroom drama is accessible to general readers. His narrator often takes a moment to clarify the meaning of legal terms in a casual, non-intrusive way, and fuzzy concepts such as the rules pertaining to hearsay evidence are explained simply and without unnecessary detail.

Turow is also known for his interesting exploration of subject matter that relates to the story at hand. In this case, he looks closely at the development of cancer treatments and the confusing testing and approval processes followed by pharmaceutical companies when bringing a new drug to market.

The surprising limitations of the Food and Drug Administration’s regulations when it comes to safety and efficacy strike a particularly relevant note today, given the current COVID-19 pandemic, the desperate need for a vaccine, and the dismay felt by so many at the amount of time it will take to see one become available.

For a person whose primary career has been the law and legal advocacy, Turow should also receive credit for being more than a passable novelist.

His ability to create and develop engaging characters is on display to full effect in The Last Trial. Sandy Stern and his circle are accessible and comfortable figures, and it’s particularly interesting to see how the author handles a protagonist very close to the end of his life.

Stern’s legendary sharpness in the courtroom wavers once or twice, and the fact that Turow opens the novel with a prologue in which our beloved hero collapses at the defense table creates an element of suspense that carries through the story. Throughout, Turow allows time for Sandy’s reflections on his life’s work, how it compares to that of others such as Kiril, and whether it measures up to his own expectations, without interfering with the pace of the story.

Turow also shows an adept hand at characterization in other spots, such as in a quick-brush portrait of Kiril’s son Lep as a boy. Stern recalls him as a polite, introspective youth who spent most of his time with his nose in a math workbook. When Stern looked at what the boy was reading and found it incomprehensible,

“Lep offered a sealed smile worthy of Mona Lisa. It was not really childish pride he was exhibiting. He was instead seemingly acknowledging that Stern had discovered his secret, that the complexity of the mathematics allowed him to move through a world of largely impenetrable privacy. It was as if he was keeping a diary that he knew his parents would never be able to read.”

That Lep later plays a key role in the prosecution of his father further enhances the mystery surrounding him that Turow manipulates to full advantage.

If fault must be found with this novel, it resides in its structure. The prologue, while creating suspense, sits in the back of one’s head throughout like a second shoe that won’t drop. There’s a fine line between Hitchcockian suspense and prolonged irritation, and this prologue arguably crosses the line.

Additionally, where the climax of most courtroom dramas lies in the delivery of the verdict by the jury, this one occurs beforehand, right after Stern’s summation, when he finally keels over and the lights go out. News of the verdict comes to us afterward, at the beginning of a very long dénouement that involves more than a hundred pages of back story explanations, housekeeping, and mystery solving. Too long, too repetitive of earlier scenes, and too anti-climatic.

Despite its structural flaws, The Last Trial is another excellent courtroom drama by a proven master of the legal thriller. Unlike other hall of famers in the genre (John Grisham comes to mind), Turow is smart enough to stick to what he does best—a solid legal thriller with a page-turning story, an excellent main character, and fresh insight into subject matter that extends naturally from the trial at the center of the novel.