The Last Time I Saw You: A Novel 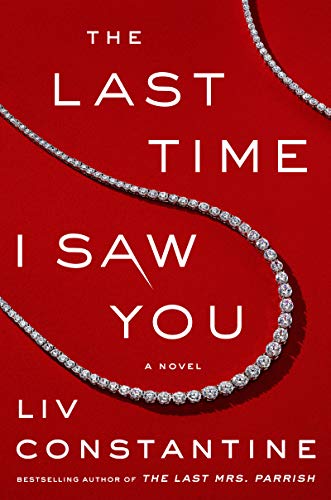 “From murder and madness to secrets and fraught family relationships, the non-stop glitz gives this tale soapy sheen that makes for perfect escapist summer reading.”

Secrets and suspects abound in this twisty psychological thriller by Liv Constantine. Dr. Kate English appears to have it all—a successful career as a cardiothoracic surgeon, a loving husband, a beautiful four-year-old daughter, and rich, supportive parents. One of her only regrets is her longtime estrangement from her childhood best friend, Blaire Barrington. Kate and Blaire were raised almost as sisters, with Kate’s mother Lily taking the less fortunate Blaire under her wing, even decorating a room for her in the family’s home. The young women fell out when Kate decided to marry Simon over Blaire’s objections, and they haven’t spoken since.

However, the brutal murder of Kate’s mother brings Blaire back into town, and her timing couldn’t be better for the grieving Kate.

“Only days ago, Kate had been mulling over what to get her mother for Christmas. She couldn't have known that instead of choosing a gift, she'd be picking out her casket. She sat in numb silence as the pallbearers slowly made their way to the doors of the packed church. A sudden movement made her turn, and that's when she saw Blaire. She'd come. She'd actually come! Suddenly, it was as if Kate's mother was no longer lying in that box, the victim of a brutal murder. Instead, a different image filled her head. One of her mother laughing, her golden hair whirling in the wind as she grabbed Blaire and Kate by the hand and three of them ran across the hot sand into the ocean.”

Unfortunately for Kate, her situation worsens after the funeral when someone begins sending her sinister nursery rhymes suggesting she might be the next to die. Blaire, a successful mystery writer, vows to use her sleuthing skills to ferret out the guilty party. Not surprisingly, Simon is Blaire’s number one suspect, but she unearths additional lurid secrets hidden among several parties in Kate’s inner circle.

“She gasped when she opened the folder. Photo after photo of Kate. She went through them as fast as she could: Kate in a coffee shop, sitting alone; Kate coming out of a yoga studio; Kate loading groceries in her car. There were hundreds of them—all of Kate, all candid.”

Despite Blaire’s efforts to uncover the stalker’s identity, the threats keep coming, and Kate starts to unravel. Her tormenter must be someone close to home with intimate knowledge of her life and secrets. As new suspects are revealed, fans of the domestic suspense genre will be swiftly turning pages as they race to discover who killed Lily and whether Kate might meet the same fate.

Constantine transporters readers into the heady world of effortless wealth, in which all the expensive possessions are name-checked and 24-hour private security is available at a moment’s notice. Fans of Constantine’s debut novel, The Last Mrs. Parrish, know that this sister duo, Lynne and Valerie Constantine, excels at depicting manipulative women. There are many on display in this new tale, from a scheming young colleague who may want to snare Kate’s husband to a nanny with potentially nefarious motives. But it’s the tantalizing possibility that one of our narrators, Kate or Blaire, might not be telling the whole truth that gives this story its verve.

Experienced thriller fans may guess some of the big twists in The Last Time I Saw You, but they’re not likely to see all of them coming. From murder and madness to secrets and fraught family relationships, the non-stop glitz gives this tale soapy sheen that makes for perfect escapist summer reading.

Joanna Schaffhausen's most recent novel is the forthcoming No Mercy: A Mystery (Minotaur, 2019). She is winner of the Mystery Writers of America/St. Martin's Minotaur First Crime Novel Award. She has also been a scientific editor, and an editorial producer and writer for ABC News.