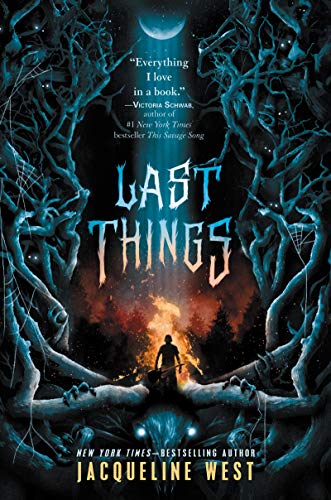 “From its first sentence to its last, Last Things is a propulsive thriller readers will have a hard time putting down.”

A small Minnesota town brimming with secrets provides the setting for Jacqueline West’s dark YA thriller about the cost of talent and the evil that lurks in the woods.

Anders Thorson is an unusually gifted songwriter/front man for the high school metal band, Last Things. His musical chops are phenomenal, even if he is only 18, and fans come from far and wide to hear the band play. They seem poised on the edge of stardom, but beneath all the rock star poses, something is bothering Anders.

Thea Malcolm is one of his admirers. The girl that nobody notices, she prefers to stay on the fringes of things, always watching. Is she a stalker or a guardian? And if the latter, what’s she guarding Anders from? As the story unfolds, even more questions arise. Why do the woods, or its denizens, watch Anders? Where did his prodigious musical talent spring from? (Oddly, his songs arrive fully formed, with lyrics and melody complete.)

West takes her time unveiling the secrets in terse, propulsive prose, weaving an eerie mood of backwoods goth as the suspense rises. The point of view switches seamlessly back and forth from Thea to Anders, and as they comment on the action, gradually the reader begins to grasp what’s unfolding.

Despite his rock-god status in high school and around town, Anders feels undeserving of the praise, the opportunities, and his sort-of girlfriend, Frankie. He can’t be sure that she doesn’t want him just for the music, and his insecurities haunt him at every turn.

“I clear another stripe of mirror with my forearm. I put on the rock-star face. Aloof, a little haughty. A little hard. The guy in the mirror almost pulls it off. He can fake it, anyway. Except for the eyes. His eyes still show what a complete and perpetual dork he is.”

Talent managers and small record labels try to sign the band to a deal, but Anders resists, causing tension with his bandmates. He uses the excuse that they should wait until after graduation to accept money for their music, but there’s something more at play here. His thoughts keep returning to an event months before, when a strange conversation in the woods resulted in his receiving a high-end Ibanez electric guitar.

Thea knows what happened. And as the story progresses, it becomes clear that she’s using her supernatural powers, guarding against the darkness in the woods that’s trying to claim Anders.

“I can see the dark things. They’re trying to hide, but I can spot them, hunched behind corners, pressed against walls . . . They are waiting. I can feel them. And they can feel me pushing back.”

It all comes to a head when a “dark lady” shows up to one of the band’s gigs and Thea can tell she’s “one of them.” The woman offers Anders a contract, and when he refuses, she declares he will lose all the things he loves, one by one. Then the woman vanishes mysteriously.

From its first sentence to its last, Last Things is a propulsive thriller readers will have a hard time putting down.