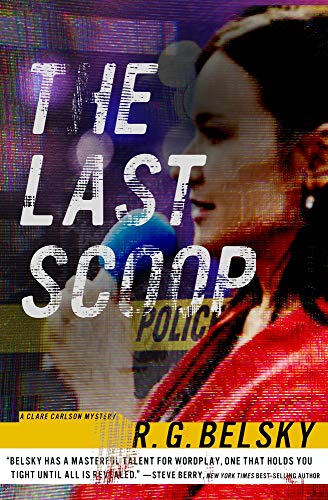 “The Last Scoop is another surefire success for author R. G. Belsky as well as for Oceanview Publishing which has been putting out one top-notch page-turner after another.”

Clare Carlson is back in Belsky's latest Clare Carlson Mystery Series with more sneak peeks into what goes on behind the scenes of TV news. Readers will be hooked from the opening pages when Clare expounds on the complexities of truth and lies. She declares that she is a woman of such high moral values that she never lies. Never.

In this latest, Clare is again butting heads with the bosses after she is guilted into pursuing an unfinished investigation, a story brought to her by her former newspaper editor and mentor—now retired—Martin Barlow. It was a story he had not been able to interest anyone else in pursuing because it involved vague suspicions—hunches, really—or so it seemed about Terri Hartwell, a popular district attorney who had a very good chance of winning the upcoming mayoral election.

Barlow has no details and is still trying to figure it out himself. Bereft of the investigative resources available to him before he retired, he turns to his old colleagues in the news business. But with so little information to offer and no proof of anything, his suspicions are brushed off by everyone and so is he. Dementia, you know.

He shows up in Clare's office and asks her to work with him on the story:

"I started out thinking this was a story about building corruption. Illegal payoffs to politicians and authorities by wealthy New York City landlords. But now it's bigger than that. Much bigger. There's murder involved too."

Because she feels like she let Marty down, she approaches her boss Jack Faron and runs it by him. She shows him the newspaper article about Marty and explains her relationship to him. She wants to run a piece about it on the evening news.

But no luck. Faron shrugs it off:

"He was an old man. He died. There's no story there." No proof, no celebrity, no pizazz. Not ratings worthy, which is the end all and be all in the TV news business.

But if anyone thinks that's going to stop her, they don't know Clare.

The first thing she does is contact one of her three ex-husbands, a cop, who dismisses her concern as a conspiracy theory. Next she visits Marty's grieving family, which only increases her curiosity when it seems there is not much actual grieving going on, and she discovers that Marty's son-in-law has a connection to DA Terri Hartwell.

Even so, Marty's daughter turns over her father's laptop on which Clare finds a secret password protected file. She keeps digging and nudging and poking and annoying everyone in her attempt to get to the bottom of the case that had so intrigued her old friend and mentor.

An emotional subplot about a secret daughter runs concurrently with the main story and shows Clare's vulnerability underneath her strictly business demeanor. Readers will like her despite her sometimes mouthy—some would say pushy—manner. When pursuing a story, Clare does not take no for an answer.

The Last Scoop is another surefire success for author Belsky as well as for Oceanview Publishing which has been putting out one top-notch page-turner after another.