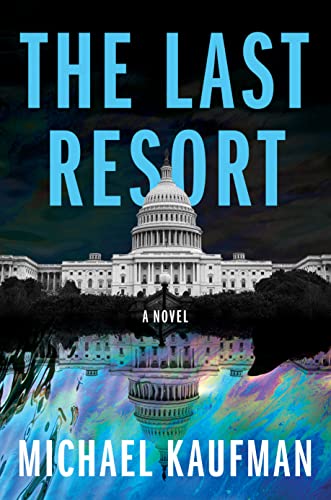 “After the first ‘future shock’” this chatty two-points-of-view crime investigation could easily be a Sherlock Holmes or Hercule Poirot detective novel.”

A mystery set in 2034? When police detectives have embedded electronic assistants to help keep track, record statements, dig into records? It’s a wild premise, but The Last Resort is the second Jen Lu mystery from Michael Kaufman, and after the first “future shock,” this chatty two-points-of-view crime investigation could easily be a Sherlock Holmes or Hercule Poirot detective novel.

The America pictured has already gone through climate collapse, with portions of the nation uninhabitable and an even more extreme distance between the very wealthy and the homeless. Patty Garcia, a lawyer and media charmer, turns up dead on a high-end golf course where Rock Creek Park used to be. DC detective Jen Lu (yes, of Chinese ethnicity) and her implant Chandler catch the case, which is promptly declared an accident. And it’s hard to see how it could be murder. The thing is, there are such powerful forces eager to see Patty Garcia dead, and the market takes such a surge at the good news, that Lu can’t stop pushing into possible means and opportunity for several unpleasant and rich corporate leaders.

Chandler, the implant, adds appeal to the story, as he keeps track of possibilities, not always calmly: “Culpepper: Motives up the wazoo. Problem: He’s packing an alibi as irrefutable as a beautifully programmed string of zeros and ones. I know I’m supposed to be a computer, but I was feeling rather emotional about Culpepper. I hated the guy . . . I didn’t want to let him off the hook. Not yet.”

The solution to Lu’s case is a well-crafted matter of checking timing and evidence, with a couple of future-society quirks that add satisfaction to this unusual mystery.