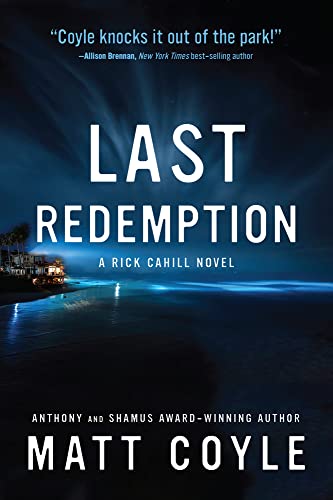 “For readers of the Rick Cahill series, you know that each new book adds additional layers to its characters. That history, however, isn’t vital to appreciate Last Redemption, as any necessary backstory is doled out through the narrative. Still, it’s a good bet that if this is your first Cahill novel, it won’t be your last.”

Too many bumps on the head over his career have resulted in blackouts, fugue states, and temporary memory loss. Fortunately, those blackout periods don’t last too long at a time. At least not yet. Rather, as Cahill says, “Just a fraction of a minute, but an infinite vacuum of panic when you don’t know where you are.” And even more panic when he realizes that the worst is likely yet to come. The task is to delay the inevitable as long as possible.

In lesser hands, Cahill’s recounting of his battle with CTE might come across as whiny. Instead, Coyle skillfully gives a matter-of-fact voice to his detective, drawing the reader into Cahill’s struggles to make a life for himself and his fiancé, Leah, who carries their unborn child. Cahill, in turn, carries the burden of his condition, which he conceals from Leah and his best friend, fellow PI Moira McFarlane.

That friendship with Moira, he says, “was born out of an irregular partnership built on long hours of surveillance boredom, simmering danger, and quick flashes of life and death violence.” And it’s a friendship intimate enough that Moira can see that things are amiss with Cahill, and she delivers an ultimatum: “I know there’s something wrong with your brain and you need to tell Leah about it.”

In due time, of course. In the interim, in an effort to stem the speed and ferocity of the CTE onslaught, Cahill works to convert his business from one employing guns, knives, fists, and mayhem, with the attendant blows and bullets to the head, to an office practice using a computer as his new weapon of choice. While it is grossly out of character for Cahill, it is destined to become his new, and safe, normal while awaiting the dreaded inevitability.

In this new normal, a date has been set for Cahill’s marriage to Leah. Soon. Because, as Cahill says, “We wanted to be married when the baby was born.” More importantly to Cahill’s failing mind, and a thought he dares not speak to Leah, “I wanted to be fully cognitive. . . . Time meant everything now.”

So when Moira’s 24-year-old son Luke disappears after a strange fight with his girlfriend that resulted in a restraining order, Cahill realizes that Moira has lost her objective sensibility. Luke is, after all, her son, and she is unwilling to accept even the possibility that he might have engaged in any wrongdoing.

What starts as a simple missing persons case quickly turns into something much bigger and more complex, involving corporate intrigue, cures for cancer, and murder. “All I had,” Cahill says, “was a jumble of jigsaw pieces without a box to show the big picture.” And to make matters worse, his brain isn’t firing on all cylinders as he tries to put the pieces together.

But one crucial question emerges from his investigation: Is Luke a victim . . . or is he a killer? It’s a question Moira doesn’t really want an answer to, but Cahill is determined to find the truth, even if it puts his friend and her son in the crosshairs. “I had one gear when I worked a case. Go. I only hit stop when the truth was found. Then I noticed the damage the truth and I had wrought.”

So what is the truth here? Cahill ultimately finds out but not before it all culminates in a spree of the very type of violence he had been trying so desperately to escape.

One of the real joys of Last Redemption is the author’s ability to take us inside Cahill’s failing mind as he searches for Luke, all the while walking a tightrope with his fiancé, his friend, and even law enforcement. The reader sees what Cahill sees, feels what Cahill feels, and can’t remember what Cahill can’t remember, even if only momentarily. It is the ultimate in enabling the reader to empathize with a character.

For readers of the Rick Cahill series, you know that each new book adds additional layers to its characters. That history, however, isn’t vital to appreciate Last Redemption, as any necessary backstory is doled out through the narrative. Still, it’s a good bet that if this is your first Cahill novel, it won’t be your last.

Mike Farris is an author of both fiction and nonfiction. His nonfiction books include the Amazon bestseller A Death in the Islands: The Unwritten Law and the Last Trial of Clarence Darrow and the award-winning Fifty Shades of Black and White: Anatomy of the Lawsuit behind a Publishing Phenomenon. A retired attorney whose practice included commercial litigation and entertainment law, Mr. Farris is an adjunct professor of Constitutional Law and Entertainment Law at the University of Texas at Arlington.