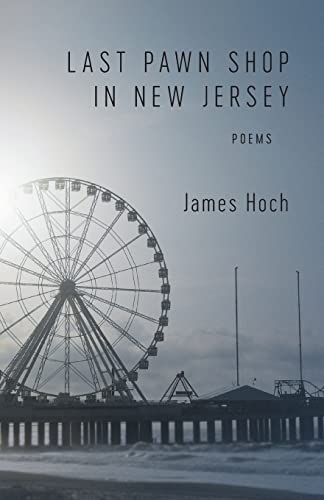 New York Journal of Book’s editor, Lisa Rojany, forbids its writers from the first person. There is no I in books, I suppose, and I suppose also that she is correct:  a book should be judged on its merits alone. “Presence implicates the missing,” poet James Hoch writes in his poem “Sunflowers,” in this third book of his, and he’s right. She’s right.

So a book reviewer should not mention that they have received, and read, Hoch’s latest book after a month of daily tending, physically and emotionally, to their aging father trying his darnedest to die, nor should they mention the obvious and prejudicial connection to Hoch’s book confronting the recent departure of his mother. Nor would they note the reality that Hoch’s book isn’t about that, not really, and this review isn’t about that, not really.

It’s about life, you see: ugly, beautiful life. Last Pawn Shop in New Jersey takes a great deal from the late Stanley Plumley’s late book of late poetry: both use death as catalyst but understand that death is punctuation. Presence implicates the missing.

So much of successful poetry lives in the elevation of the mundane: few people have the bombastic life experience needed to craft compelling memoir unadorned. The real art is in understanding the exceptional parts of being unexceptional: countless poets have built fame out of nothing more than falling in love. Hell, Dylan Thomas won one award after another just by falling off bar stools.

Hoch, here, has done nothing of note: He’s raised a son, he’s lost a mother. Nevertheless, he shows it all with a painter’s brush, a gallerist’s tour of tableaus of a life, whose thick daubs of oil are still wet. “you are only looking at a painting you almost walk into,” Hoch tells us, and the painting is of the still life of his life, the still life of all lives, of raising sons and losing mothers, and falling in love and yes, even writing book reviews under the great duress of the ordinary.

Hardly any of us are James Hoch, and yet there is a little of all of us in here. It’s fitting that so many of the poems here take place in art museums, when so much of art is an analogue for life. Those still life paintings he’s walked us up to, like all paintings and all lives, do not hold up well to scrutiny:  if you look closely, you can see that all the fruit has started, slightly, to wrinkle and crack. The fish’s eyes have filled with clouds. The artist wants you to pause, for imperfection.

Hoch’s new book is dedicated, in part, to his old mentor Plumly, whose last volume arrived just a little too early to accompany this worthy effort of the student he’d had in life. You can feel Plumly’s echoes everywhere here: the assumption of, and appreciation for, the death that each of us owes and the many visits it makes upon our lives while we wait to repay it, and all the beauty we can find along the way. Hoch tends Plumly’s garden beautifully, and with tremendous elegance, opening with a prayer and a confession that would have felt just as comfortable in his mentor’s final book:

in that light, that damn light.”

There is no I in book reviews, so a book reviewer should not note current experience, but instead leave one criticism: This book is slender, thinner than a cigarette, but with such tight quality it’s not hard to see the appeal in that. Hoch came here with a job to do and did it without any need to wave his arms or misdirect the crowd. He came to make a painting, not to frame it.

The only criticism a third-person book reviewer could make, if any, is this: In the presentation of artwork, one should always be sure to curate to make a good first and last impression, and Hoch has here buried, along with his mother, his finest poem in the middle of the book. Page 57. She is gone, he is tired. It is an ordinary part of life. “In the end, you have to go home, he opens the poem, you have to leave the hospital room / where you stand bedside, though / there’s no bed anymore.” He takes you through the hospital corridors—his, perhaps, or yours, or anybody else’s, even a book reviewer’s—past nurses you’ve seen, doctors you’ve met, doors you’ve walked through. He takes you to the parking garage—maybe it’s his in Ramapo, but it’s probably just as easily yours. He tells himself, he tells yourself, that your body needs to be yours again. “But all that’s fiction, he reminds, a person you have yet to be. Right now, grief is simple: Find the car, / let the engine run some, take care / not to damage anything on the way out.”

There is no I in book reviews, but there’s plenty in this book. And plenty of you, as well. Invest the time. Hoch is right: in the end, you have to go home.