The Last Negroes at Harvard: The Class of 1963 and the 18 Young Men Who Changed Harvard Forever 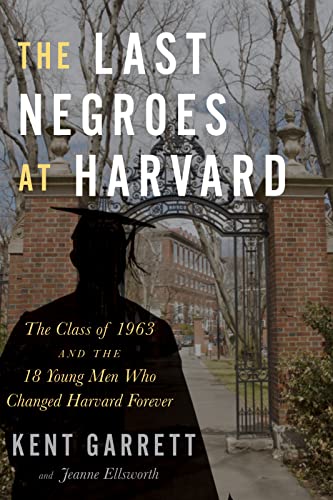 “The Last Negroes at Harvard is an accomplished work of collective autobiography that tells a compelling story of incipient transformation in a transformative time—but in a place seemingly impervious to disruption.”

Kent Garrett and Jeanne Ellsworth’s The Last Negroes at Harvard recounts the experiences of the 18 black men in the Harvard class of 1963, the largest group of blacks in a Harvard class to date when they first set foot on campus in September 1959. In Garrett and Ellsworth’s telling, these young men came to Harvard as “Negroes,” each to his own degree accepting the racial identity thrust upon him.

As a member of that class brought in by two visionary administrators determined to “beat the bushes” in search of capable Negro students, Garrett, raised in the projects in Queens, hoped just to blend into campus life as best he could and survive the awkwardness of the wary and perplexed stares that greeted his arrival in Harvard Yard. Four years later, Garrett and his classmates left as founders of the institutionally contested African and Afro American Association of Students (AAAS), having completed a journey to racial self-awareness that no class of black men at Harvard would ever begin at the same place again.

Much of the story belongs to Garrett, although the book weaves together the experiences of his black classmates, assembled through an ambitious oral history project begun by Garrett and Ellsworth in 2009. It’s a risky approach, combining memoir and oral history in a single narrative that often jumps about in time, but for the most part it works quite well.

One of the book’s most telling moments occurs the first day of classes in 1962. Garrett returns to Cambridge to begin his senior year amid rumblings of a much more contentious matriculation in far off Oxford, Mississippi, where James Meredith was attempting to challenge more than a century of hallowed segregationist tradition and enroll at the University of Mississippi. While Garrett “breakfasted amiably with whatever Eliot [House] boys happened to be around, most likely white guys, and enjoyed the walk to my first class as a light fog lifted through the fall leaves,” Meredith, Garrett writes, “brushed shards of windshield glass from the seat of a federal marshal’s car and got a lift to his first class, surrounded by armed guards, inching through the rubble of spent tear-gas canisters, bricks and bottles, and burnt-out cars.”

Assimilating quietly into his surroundings—as Garrett had hoped to do as a Harvard freshman—was never in the cards for Meredith, who spent much of his time on the Ole Miss campus living under the protection of U.S. Marshals. During the deadly white riot that marked his arrival, and for quite some time thereafter, whether Meredith would even survive his attempt to become a student at his own state’s university remained in doubt.

“Now what might happen?” Garrett recalls wondering. “Maybe the segregationists would prevail. Maybe James Meredith would be lynched, and soon I’d see a photo of his ruined corpse in Jet magazine,” as Garrett had seen the murdered Emmett Till’s in 1955. A young man “who was a lot like me was suffering the bitter hatred and murderous violence of whites who were a lot like my classmates. At times, this awareness made me relapse into the wariness I had when I first arrived as a freshman, the gnawing idea that I didn’t really belong there. I didn’t have any thoughts of leaving, but I was reminded of what a tiny minority I was at Harvard.”

Meredith’s mere presence on campus, to the vast majority of Mississippians—university administration, faculty, and student body included—represented the destruction of an entrenched tradition of white exclusivity and black subjugation. Of course, Cambridge wasn’t Oxford, and Harvard was a far cry from Ole Miss.

The 18 Negroes sprinkled among the class of ’63, all of them formally welcomed into the university’s “bubble of genteel liberalism,” were not perceived as a threat to Harvard’s longstanding traditions, even though those traditions were every bit as white (if not as emphatically white supremacist) as those of Old Miss. The prevailing presumption was that those traditions were safe because Negro students would know better than to try to disturb them. “If all went well—if we all measured up and blended in and kept smiling—presumably Harvard could just go on finding a small number of good Negroes like us and the college would be pleasingly integrated,” Garrett writes. “It would remain the same old revered institution.”

But it didn’t happen like that. Larger groups of blacks in subsequent classes struggled to reshape the university to reflect its changing demographics. Those classes “would soon reject the word ‘Negro’ altogether,” Garrett writes, “and they would demand of Harvard things we couldn’t yet imagine. The eighteen of us were out in the world by then, some of us making similar demands of the larger society.”

In chronicling the early stages of this struggle, The Last Negroes at Harvard provides a compelling complement to Stefan M. Bradley’s Upending the Ivory Tower: Civil Rights, Black Power, and the Ivy League. Bradley’s incisive study traces the long arc of Ivy League integration but focuses particularly on those years shortly after Garrett’s time at Harvard, when black students began to insist on shaping their own destiny and with it the culture of the universities whose doors they had kicked open. By insisting on more aggressive recruitment of black students and faculty and the development of Afro-American Studies programs, those students demanded something more of historically white universities that, up until then, had merely deigned to let them partake of their bounty on the condition that the few blacks on campus would help to broaden white students’ experience but otherwise remain more or less invisible, leaving the schools precisely as they found them.

It was they prefigured the Black Power era that shook Ivy League campuses that makes Garrett’s class so interesting, both in Garrett’s own recollection of his time at Harvard and in the many reflections he collected when he and his wife and co-author Jeanne Ellsworth began their exhaustive efforts to track down his black classmates and record their recollections. The Last Negroes at Harvard captures remarkable changes in these men’s perceptions of themselves, of Harvard, and of the white world to whom Harvard introduced many of them (including Garrett) over the brief four years in which they were students.

It’s a testament to the success of Garrett and Ellsworth’s 10-year oral history project that The Last Negroes at Harvard is as much the story of Jack Butler, Bobby Gibbs, John Woodford, Kent Wilson, Travis Williams, Ezra Griffith, and Lowell Davidson as of Kent Garrett himself.

The book documents the students’ path to racial consciousness in several ways, starting with their reflexive (and more or less expected) self-segregation in the freshman cafeteria, and their efforts to date and find a meaningful social life beyond the campus’s all-white confines at other area universities and in Boston’s vibrant black community.

Garrett’s book really picks up steam midway through when he describes “the unparalleled thrill of seeing Malcolm X the man up close” at a Harvard house dinner, and his classmates’ increasing awareness of the accelerating Civil Rights Movement and its inseparability from contemporaneous African liberation struggles.

Garrett also reveals that the oral history project that informed this book, initiated in 2009, wasn’t the first sociological study conducted with the black members of the class of ’63. In their freshman year, a white classmate named Ron Blau undertook an ambitious study of Harvard’s new class of black students called “Bright Shadows in the Yard.” The project yielded a paper that Blau saved for half a century and made available to Garrett when reconnected with him while he was researching The Last Negroes at Harvard.

Though annoyed at Blau for (among other things) having had the audacity to ask his black classmates if, given the choice, they would still prefer to have been born Negroes, Garrett finds himself “silently thanking” Blau for never throwing out his paper, and credits him with having “a remarkable ability to size up a guy.”

The preserved paper includes not only the complete “Bright Shadows in the Yard,” but also the comments of Blau’s professor and advisor on the project, David Riesman, a leading sociologist of his time and co-author of the landmark study of 1950s conformity and consumer culture The Lonely Crowd. Much more than his student, Riesman comes off as a relic of his time: “Ron took the fact that we all wanted to keep being Black at more or less face value, while Riesman took it as evidence of a pathological denial.”

Garrett’s book would be worth the price of admission just for his dissection of Riesman’s responses, which exposes the alarming racial myopia of one of the most acclaimed white liberal intellectuals of that era. But it delivers much more. The Last Negroes at Harvard is an accomplished work of collective autobiography that tells a compelling story of incipient transformation in a transformative time—but in a place seemingly impervious to disruption.