The Last Mona Lisa: A Novel 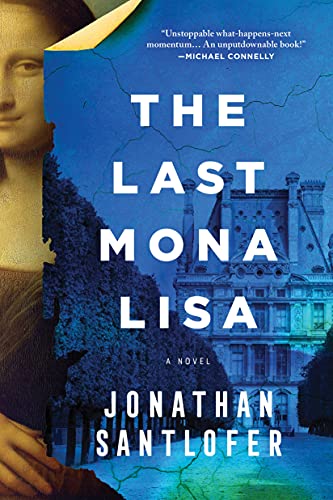 “As Luke [the protagonist] dives farther into his ancestor’s mind, we dive with him, hoping to exonerate the simple crook while admiring his bravado. We also take pause to consider complex questions about the value of art for the individual as well as for society.”

In 1911, a Louvre worker took the Mona Lisa off the wall and absconded with it. Vincenzo Perrone kept the painting for more than two years. After returning to Italy, he contacted authorities, claiming he had committed an act of nationalism by bringing the painting back to the home of its creator, Leonardo da Vinci. These facts are documented in multiple sources, including the 2012 Joe Medeiros film The Missing Piece: Mona Lisa, Her Thief, The True Story.

Writer and artist Jonathan Santlofer uses this robbery as the backdrop for his new novel. He creates a fictional grandson protagonist, Luke Perrone, and sends him on a quest to find the missing pieces of the story. Perrone’s initial goal is simple: He wants to learn about his notorious grandfather and his aspirations. An important question nags Luke. Is the Louvre portrait the true painting, or is it a clever fake created by scoundrels who persuaded the museum worker to steal the painting in the first place?

Luke takes a leave from his job as a college art professor and heads to Florence to do research. At the Laurentian Library, he tracks down his grandfather’s notes. He immerses himself so deeply in the story that he barely notices a beautiful woman who also hangs out at the library, Alex. After a coffee date, he shares details. He also shares some of his personal history: as a recovering alcoholic, he battles to keep temptation away.

The rosy picture of an artist doing genealogical research is short lived. Perrone is followed on behalf of both a sneaky art collector and an Interpol agent. Both parties want to know what Luke discovers about the painting. They are ruthless enough to use any means necessary to pursue the naïve teacher.

These various elements give readers an enjoyable ride as the story alternates between Luke and his enemies. Santlofer includes light information about art without being didactic. He creates empathy for the earnest project of his protagonist and even for the original art thief. Why was Vincenzo so keen on stealing this particular painting? Santlofer offers an intricate alternate history as he takes us further and further into the thief’s social context, circumstances, and ways of thinking.

The style is brisk and sharp but avoids the staccato of many modern thrillers. By exploring various characters, Santlofer gives us a variety of ways to think about the world of art as well as the original crime and its consequences. He paints pictures of modern-day Florence and Paris before taking us over a century into the past and inviting us to reconsider Vicenzo Peruggia and his strange actions.

The novel also serves the armchair traveler by creating vivid, realistic images. When Luke enters the cloister of San Lorenzo, “it was as if I were entering a dream, the square garden with its hexagonal-shaped hedges and two-story loggia, classic and harmonious, all of it designed by my favorite Renaissance architect, Brunelleschi.”

He uses this broad canvas to place us in the shoes of his narrator: “For a moment, I tried to imagine I was an artist of the High Renaissance and not some struggling New York painter who taught art history to pay the bills.” We envision the scene; perhaps we, too, have invented alternate versions of ourselves.

Other passages offer imaginative possibilities of the past. The grandfather tells his own story: He watched his wife “spin, feeling something open up inside him, always surprised that this intelligent, delicate beauty had settled for him when she could have had any man in Paris.” Vincenzo may have stolen a painting, but Santlofer also creates him as a hopeless romantic, a man with few means but great passions.

Vincenzo is, in fact, the perfect villain. In his mind, he is a hero. We come to understand his mindset even with 21st century sensibilities. In Luke’s mind, his grandfather is a complex man whose reasoning is understandable, if unforgiveable. As Luke dives farther into his ancestor’s mind, we dive with him, hoping to exonerate the simple crook while admiring his bravado. We also take pause to consider complex questions about the value of art for the individual as well as for society. Above all, why has this single painting commanded so much attention and speculation? How did Leonardo himself manage to pour such mystery and wonder into a portrait that measures 2’6” by 1’9”?

Whether he’s on the trail, failing in love, or trusting the wrong people, Luke takes us along on his journey. We may well be thankful that our own relatives have kept lower profiles. It’s also possible that we hope to find journals locked in our ancestral attics that help us understand our forbearers as much as they help us understand ourselves.