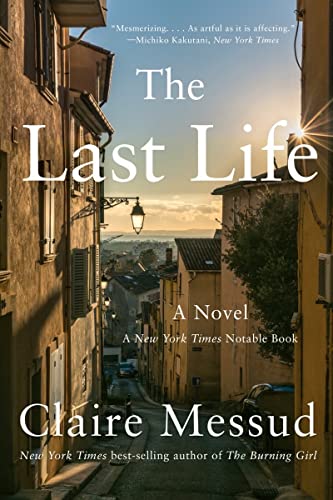 “The Last Life isn’t an easy read, but it’s a rewarding, thought-provoking one.”

Claire Messud packs a lot into her latest novel, The Last Life. For many readers, it could be too much. There are certainly fascinating themes woven throughout, the strongest one being about national identity, who belongs where and why. The narrator, a teenage girl named Sagesse is the daughter of an American mother and a French father. This is made even more complicated by the fact that her father and the grandparents they live near are pied noirs, French colonists from Algeria, kicked out of the country when Algeria gained its independence. The effects of this brutal colonial past runs through the novel, with the men especially effected by it. Both Sagesse’s grandfather and father use guns for violent ends in ways that scar Sagesse’s youth and adulthood.

Family stories and secrets are other themes, both acting as ways of defining who we are. Sagesse sees herself as a blend of nationalities, a chameleon flitting from one identity to another, while her past shapes both her present and her future. The writing works best in these passages, showing sharp insight into the toll this adaptability takes and the rewards it reaps. The book opens with a sentence that sets the stage for the way this will all play out:

“I am American now, but this wasn’t always so. . . . I’m not American by default. It’s a choice. . . . It dawned on me in those early days that I was, in this place, remarkably, a cipher. I didn’t speak much (the tidal wave of American English was tiring for me, and it took all my energy to keep up), and anyway I felt that my personality didn’t translate.”

Anyone who has learned a second language, lived in another country, will relate to this feeling, so deftly encapsulated here. The sections about secrets are less strong, feeling forced in places, especially the subplot about Sagesse’s brother, Etienne. Born with brain damage, he needs constant care:

“For my parents, this was the clanging of their prison door. But for me, two years old when they came home with him, my path was already chosen. We were the same, I decided, cooing over the silent bassinet and I, at least, would not abandon him. . . . I despised him as much as I loved him: he was—he is—my limitation.”

Throughout the complicated plot, the writing is vivid. We see Sagesse’s world clearly through her eyes, her friends, school, her grandfather’s hotel in southern France, which has a mesmerizing hold on the entire family. What are our legacies and what do we do with them? Do we control them or do they control us? The book suggests many interesting questions and the reading group guide in the back directs the reader along some fascinating paths. The Last Life isn’t an easy read, but it’s a rewarding, thought-provoking one.