The Last Leonardo: The Secret Life of the World's Most Expensive Painting 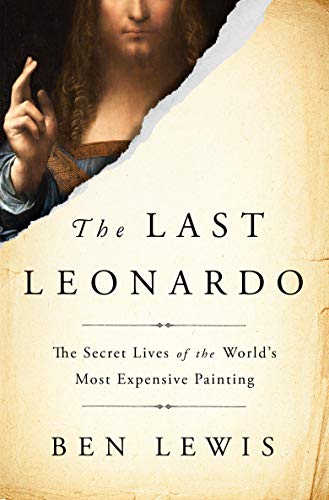 “A $450 million price tag. And what of that? Was it 500 years of history that warranted that exorbitant amount? Or was it the spiritual aura?”

Leonardo da Vinci, “dreamer, doodler, dawdler,” left only a handful of paintings as a legacy to his artistry and as proof to his mastery of this genre. Some, such as the Mona Lisa and The Last Supper, are well established and obviously attributed to Leonardo’s own hand. But many paintings are harder to pinpoint precisely and leave a more mysterious set of clues surrounding them. The Salvator Mundi is one such painting and the topic of Lewis’ The Last Leonardo.

How can one lowly little painting go from a broken-down, discarded afterthought hardly worth the cost of listing in a third rate gallery auction catalog ($1,175 in 2005) to a $450 million record breaking show stopper (Christie’s 2017)? It was a wild ride for sure. A story as unbelievable as any fiction on the shelves, only this is not fiction, or is it?

Lewis has served as investigator-journalist-historian in telling this backstory to a painting that still can’t deliver concrete answers. Half historical fiction with Agatha Christie-style clue disclosure, and half investigative reporting with an art history educative quality, The Last Leonardo aspires to communicate many things that makes it dry in places and fascinating in others.

Yet in spite of its inconclusiveness, this painting represents a captivating look at the universal allure of Leonardo, the high roller art market, international politics, big business, curious cultural quirks . . . well, you name it, with 500 years to its seniority, the Salvator, and Lewis in his research, has hit upon just about every angle there is or could potentially be.

Balancing the narrative between various episodes, Lewis begins with the journey of the dealer Robert Simon (the one who made the 2005 purchase with a partner Alex Parrish). Simon makes his way, painting in tow, on a transatlantic flight to London for a meeting of the National Gallery to “discreetly convene a panel of the greatest Leonardo scholars in the world to judge the painting behind closed doors, before taking a decision on whether to include it in their exhibition.” This meeting was one of many encounters that resulted in controversial attribution verdicts. Discrepancies and disagreements would remain, will remain, attached fixedly to this painting for the foreseeable future.

Including background biographies of a dozen or so characters involved with buying, selling, curating, restoring, and analyzing Renaissance paintings, Lewis’ story winds around topics as varied as Leonardo’s notebooks. From the origin of the wood paneling on which the Salvator is painted, to a discussion on what makes a Leonardo painting a Leonardo painting, to Simon’s inspiration to purchase the wreck of a remnant that was the 2005 Salvator. This, all within the first section.

We are educated with flair and humor as to the purchasing strategies of the kings of England, particularly Charles I in the 1630s. The first suspicion that Charles I could actually possibly maybe have been an owner of this very Salvator, but, also, maybe not. Lewis is very good at setting a stage, speculating, building up a convincing context, and then knocking it over as a not entirely bullet-proof scenario. Entertaining, but also a frustrating yo-yo game. Most of the book, like most of the life of this painting, is conjecture. Informed, well researched, plausible, but not a rock-solid account. Which mimics well the refutable nature of the Salvator’s own provenance and attribution.

The pattern of volleying between historical education, biographies of seemingly tangential players giving backstories to the backstory, and present-day event continues in parts two and three as he attempts to trace the path of an elusive painting that didn’t seem to want to be followed.

Readers get quick insights on how auctions work, how art is stored in tax free ports, how secretive and hush hush transactions must be, and how convoluted and divisive the art world really is. Emphasis is clear that things have always been this way since the beginning of art and are likely to remain this way in this exclusively trillionaire playground.

Lewis provides a mood which betrays how risky and emotional life much have been for Simon and Parrish during the 12 years they protected, promoted and invested in their fragile baby. We get a feel for how good Lewis is at chasing false leads and making a book out of them all. He is almost as good a salesman, and as talented a wordsmith, as the art dealers that wrangled out an eye-popping sale.

A $450 million price tag. And what of that? Was it 500 years of history that warranted that exorbitant amount? Or was it the spiritual aura? In the end it is the complex story of multiple personalities that came in and out of the Salvator’s life that was worth so much. It was a coalescence of perfect storms (or maybe of fortuitous circumstances), special interests, and very, very good marketing of mystique, power and potential—three hotly desirable commodities—oh, and maybe a Leonardo thrown in as a consolation prize.

The funny thing is that the Salvator Mundi is still generating mystery; it remains unclear who purchased it and where it resides. According to Lewis, it is M.I.A . . . the saga continues. The Last Leonardo tackles a massive and convoluted history project as it observes what has happened to the Salvator Mundi.