The Last Housewife: A Novel 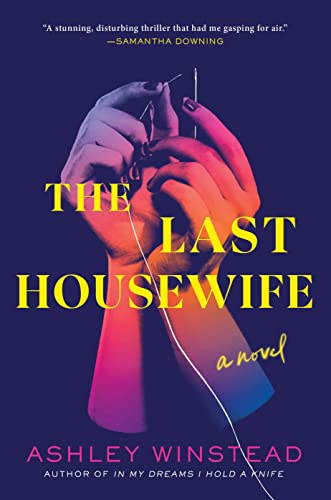 “As an exploration of misogyny and violence, this story hits with relevance and a timely anger.”

Shay Deroy is living a life of ease, glamour, and restlessness when she listens to another episode of Transgressions, a true crime podcast created by her childhood friend, Jamie Knight. It has been years since she last talked with him, but she would recognize his voice anywhere, and she gets a thrill from hearing him speak about atrocities far from home. Her own life feels unfulfilling, ordered by the patriarchal structures of her marriage and its limitations, and the podcast is one way to reach outside of herself. However, this time the story hits much closer: The death he is investigating is the apparent suicide of Shay’s best friend from college, Laurel Hargrove. Jamie doesn’t believe the cops’ explanation and declares his intent to find out what really happened. Laurel, stunned and shaken, takes off for the college campus where Laurel met her end.

“I would not leave this to Jamie Knight, even if he was more qualified. I would go back to New York, and I would find out what happened to Laurel. I would trace the contours of her life since I couldn’t hold her hands. I would pick up her memory and cradle it. I would whisper my apologies; I would kneel on my hands and my knees in the place where she’d died and I would repent. If It was true someone had hurt her—if someone had killed her—then I would find out who and I would protect her, years too late, the only way I could.”

Shay and Jamie begin investigating together and soon find themselves in a murky underworld of sex, drugs, and violent misogyny. Shay confesses to Jamie, on tape, that this world isn’t as foreign to her as he might think. Slowly, she weaves him a story of the college experiences she had with Laurel and their roommate Clem, who died of another apparent suicide back when they were in school. Don, the father of their fourth roommate, Rachel, had come into their lives, and things were never the same. At first, Shay, a beauty pageant queen, thought she had found someone to value her, only to have that dream immediately taken away. But she was already trapped.

“And then he said, in the same breath, ‘Tell me the truth: how often do people tell you you’re beautiful?’

“In my experience, when people said you were beautiful, it was a power move—the moment another person let you know they’d clocked you, that you were a body they’d taken stock of, calculated and assessed. But Don was different. He was a good man who wasn’t supposed to think I was beautiful, because I was younger and his daughter’s friend. But he was saying it anyway, which meant he hadn’t bene able to help himself. He was going out on a limb. That made him vulnerable, and me the powerful one. It felt like a victory.

“So I said, ‘Like that? Not often.’ And he laughed and said he doubted that was true. Then he said, ‘But you’d be even prettier with blond hair.’ It stung. The power slipped back out of my hands.”

Shay’s painful memories of Don and the way he used her color Laurel’s death, and she is torn by dark memories and frightening possibilities. How do their college years connect to what happened now, with Laurel? Is Laurel’s death a result of what they were forced to do as young college students? Shay finds herself slipping back into a life of danger and men who expect women to behave in a manner which steals all agency from individual thought and expectation. Will she get out this time, or will she lose everything in order to avenge Laurel’s death?

As an exploration of misogyny and violence, this story hits with relevance and a timely anger. In a world where women’s voices are being silenced and their agency stolen, Winstead’s dark narrative serves as another look at women’s place in society, and the ability of men to turn women’s lives into an existence of pain and servitude. Recommended for those who enjoy dark thrillers with forays into the underworld of the sex trade.