The Last Graduate: A Novel (The Scholomance) 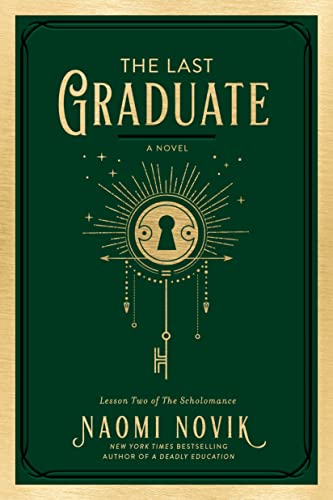 “The plot barrels along at an intense pace, straight into . . . a shocking cliffhanger of an ending. The last line of the novel will leave readers gasping, desperate for the third book of the trilogy to find out what happens next.”

El Higgins is an evil goddess in the making. Where other students at her wizarding school have aptitudes for healing potions or magical artifacts or protective shields, the spells El can learn most easily are those for large scale devastation. “If it’s a spell to destroy cities or slaughter armies or torture people horribly . . . one glance and it’s in there for good.” She can’t learn a spell to clean her room, but one to destroy the entire school with a supervolcano? No problem. “Just give me a chance and I’ll level mountains and kill untold millions, make myself the dark queen of the world.”

Despite a propensity for mass destruction and a prickly demeanor, however, El is actually a good person. She doesn’t want to command a zombie horde or cover the world in darkness. She just wants to survive long enough to graduate from the Scholomance, a school built to protect kids from dying at the hands of evil magical creatures but that generally only manages to save a quarter of them.

The first book of this series, A Deadly Education, revolved around attempts on El’s life from both monsters and fellow students and her relationship with Orion Lake, the school hero who she was absolutely not dating, despite appearances to the contrary. In The Last Graduate, El is now a senior, meaning graduation is coming soon. Graduation from the Scholomance means running a gauntlet of hundreds of dangerous monsters who have gathered to feast on the students trying to leave the school. Those who are prepared and have friends to back them up might just make it out. Those who don’t, die.

The Last Graduate is a rollercoaster ride of monster attacks, betrayals, unexpected friendships, surprise revelations, and madcap schemes. El is a delightful combination of irascibility and self-sacrifice, insolence and bravery, someone who says all the wrong things and irritates everyone around her but is ultimately willing to die to save them all. She’s her own worst enemy, sabotaging all her friendships, but to the reader, who sees her true nature and can relate to her flaws, she’s intensely likable.

A series about a wizarding school can hardly escape mention of Harry Potter, but Novik’s Scholomance series holds up to the comparison. The world is as creative, the characters as likable, the plot as compulsively readable. The Scholomance series may be darker, and at a fraction of the size, it covers less territory, but fans of Rowling’s books will find much to like here. The plot barrels along at an intense pace, straight into graduation and a shocking cliffhanger of an ending. The last line of the novel will leave readers gasping, desperate for the third book of the trilogy to find out what happens next.