The Last Flight: A Novel 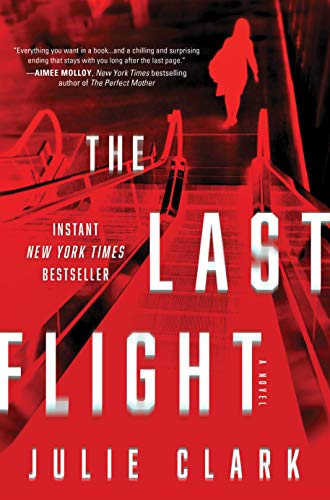 What does someone need to successfully disappear without a trace?

First, they need a plan. A foolproof plan. Then they need a place to go, along with a complete set of official looking identity documents bearing a new name—driver's license with an embossed hologram, passport, credit card, social security card, birth certificate. And money, of course.

Claire Cook, wife of Rory Cook, an abusive and controlling husband, has all that and more. The night before she plans to leave, she hacks into her husband's secret laptop gaining access to his and all the computers of his devoted staff, some of whom spy on her, all of whom are grateful to him for paying their children's college tuition.

Her getaway was years in the making:

". . . 'I assembled a plan, choreographing my disappearance more carefully than a ballet. A sequence of events so perfectly timed, there could be no room for error and now I sit, hours away from executing it.'”

At the behest of her husband, she is scheduled to fly to Detroit the next day to visit a social justice charter school funded by the Cook Family Foundation. She and a friend secretly arranged to have a Fed Ex package with $40,000 and all her new documents waiting for her at the hotel when she arrives. She'll visit the school, speak at the dinner, but later, after midnight, she'll cross the border into Canada with the money and her new identification tucked into a backpack. There was no room for even the tiniest mistake.

But come morning, she is shocked speechless when her husband's assistant brings her a surprise:

". . . 'Change of plans,' he says. 'Mr. Cook is going to do the Detroit event himself. He wants you to go to Puerto Rico. There's an organization down there—a humanitarian group that's working on the hurricane relief effort—and he thinks it's a cause the foundation should take on. . . . Someone will meet you when you arrive.'"

Claire envisions the Fed Ex package containing her fake ID and her getaway money waiting at the hotel in Detroit.

Hopes shattered, she's driven to the airport by staff, desperately trying to come up with a new plan. Frantic and out of options, she sits in the airport bar where she meets Eva, a woman as desperate as she is to find a new life.

Eva tells Claire that her beloved husband has recently died of cancer, a death she helped along in order to relieve his excruciating pain and suffering. Eva needs a change of scenery so she can alleviate her grief and escape the painful memories of his suffering and death. She also needs to escape the investigation that followed his death.

"They left the bar and walked shoulder to shoulder, forcing people to move around them, falling into a line of weary travelers in the women's room without saying more. Several stalls opened up, and Claire let people behind them go ahead, until the handicapped stall was available. She pulled Eva in after her and locked the door."

There they finalized their plan. Eva would head to Puerto Rico, Claire would go to California. Problem solved for both of them.

The plane to Puerto Rico crashes into the ocean, and when Claire arrives at Eva's apartment in Berkeley, she discovers that Eva's story of a sick and dying husband is a fabrication. In fact, nothing Eva told her about her life was true.

As Claire tries to figure out what to do and where to go, she comes face to face with Eva's secrets. Later, when she remotely accesses her husband's computer, she discovers he has plenty of secrets of his own including what really happened to his first wife.

Author Julie Clark tells the story from alternating viewpoints of Claire and Eva, delicately interweaving their stories and timelines into a plausible tale, all the while leading the reader down a twisty path of unanswered questions.

Much of the story is told in flashbacks and numerous back and forth timeline jumps in nonlinear order that some readers may find perplexing, and undoubtedly challenged the author mightily during the writing. But it all works and comes together in a powerful, high octane, suspenseful read.