The Last Days of Marilyn Monroe 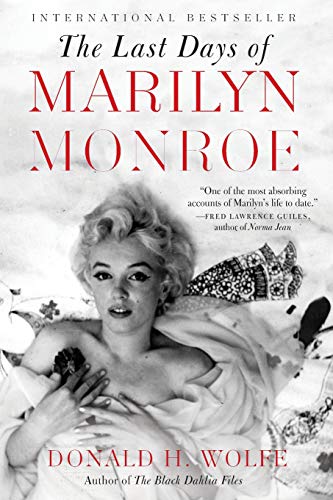 “a crazy quilt of a tale . . . Donald Wolfe manages to capture the full complexity of the woman . . .”

What occurs to the reader before not too many pages of The Last Days of Marilyn Monroe fly by is how very farfetched it all seems: that the three great loves of the iconic actress’s life were arguably the most famous sports legend of the 20th century, possibly its best playwright, and most certainly the world’s most powerful man in late mid-century America.

Combined with the horrors of her early childhood (her grandmother, for instance, reportedly attempted to smother the young Norma Jean with a pillow), the mythic quality of her rise to fame, and the bizarre and increasingly suspicious circumstances of her death (much more on this later), it all comes together into a crazy quilt of a tale, something that Jackie Collins would never dare to tell. After all, who’d believe it?

Author Donald H. Wolfe apparently hopes that we all will.

Thus the reissue of Last Days, a book first published in 1998 and now lovingly recreated just in time for the hullaballoo that will no doubt attend the 50th anniversary of the star’s supposed suicide in August of 2012.

But the reader wonders if, upon the book’s first release, anyone else had noticed how dramatically the work veers away from its title’s promise.

After 100 pages of jaw dropping revelations (hold on, we’re getting to those), the book suddenly unspools into a 300-page pageant of “The Life and Times of Norma Jean” filling page after page with all the things we’ve read before: the white piano, the first marriage, the nudie calendar, and so on.

How nice if, in deciding to republish, the powers that be had also decided to reedit, refocus, and reexamine.

But this seems a slight complaint, as bookending those pages are sections that unspool as harrowing a tale of life and death and fame and sex and love and betrayal (think: Frank Sinatra leading a brass band of famous and increasingly creepy friends, lovers, producers, directors, and assorted hangers-on) as the human mind could conceive. It would all be so easy to dismiss as prurient wish fulfillment if so much of it were not proven fact.

Among the bombshells (and I do not use the term hyperbolically as many of the tidbits contained herein are shocking, although given the subject matter of the book, somewhat ironic) Last Days suggests is this: that the long-believed theory that Marilyn Monroe died by an overdose of pills—an overdose that was either taken accidentally or as an act of suicide—is the fabrication.

The reality of her death is something far worse.

Author Donald Wolfe quotes from the case files of Dr. Thomas Noguchi, who performed the autopsy on the late star:

“The examiner’s report states, ‘A smear made from the gastric contents and examined under a polarized microscope shows no refractile crystals.’ According to Dr. Sidney S. Weinberg, former Chief Medical Examiner of Suffolk County, New York, ‘It is inconsistent with the ode of death by ingestion of a large amount of barbiturates not to have found refractile crystals in the digestive tract. Under a polarized microscope the smear should have disclosed the exact character of the death-producing drug, as each medication has its own individual crystalline shape . . .’” Noguchi said, “I found absolutely no visual evidence of pills in the stomach or the small intestine. No residue. No refractile crystals. And yet the evidence of the pill bottles showed that Monroe had swallowed forty to fifty Nembutals and a large number of chloral hydrate pills.’”

So no evidence of her having swallowed a single pill and yet her system reportedly contained “enough barbiturates to kill fifteen people.”

In beginning his book by overturning the story of her death that we have all long heard, Mr. Wolfe starts afresh, exploring the alternative theories surrounding her death, delving into the possibilities, and finally, in an explosive concluding chapter, constructs a timeline of events in which sometime during the evening of August 4, 1962, lead to the sudden death of the actress, although for complex reasons that death was not reported until the early hours of August 5.

Mr. Wolfe works with a journalist’s skill, but with the voice echoing Dashell Hammett’s he commits words to the page as if constructing a noir thriller, as the opening paragraphs attest:

“Before dawn on Sunday, August 5, 1962, a warm wind swept off the Mojave Dessert and rushed into the Los Angeles basin, swaying the tall trees that formed a curtain of privacy around the Brentwood home of Marilyn Monroe. Antique wind chimes that had been a gift from the poet Carl Sandburg softly tolled in the darkness. Strange sounds were carried on the wind during the night—shouting and the crash of broken glass. Neighbors reported that a hysterical woman had yelled, ‘Murders! You murderers! Are you satisfied now that she’s dead?’

“Mr. and Mrs. Abe Landau, who lived to the immediate west of Marilyn Monroe, had returned home from a dinner party late Saturday evening and had seen an ambulance and a police car parked in the cul-de-sac in front of the film star’s residence. Near midnight neighbors heard a helicopter hovering overhead. There were other strange sights and sounds before dawn as the city slept. In the crush of time and extremity the film star’s home was carefully rearranged, telephone records were seized, papers and notes were destroyed—and a frantic phone call was placed to the White House . . .

“At midnight on Saturday, August 4, 1962, Sergeant Jack Clemmons came on duty as watch commander at the West Los Angeles Police Department on Purdue Street. Clemmons’ duties proved to be routine until a call that came in shortly before dawn. The caller identified himself as Dr. Hyman Engelberg and said, ‘Marilyn Monroe has died. She’s committed suicide.’”

What follows is a tale of the mad crush of fame, one far more baroque than the one that ended with Joe Gillis floating face down in Norma Desmond’s swimming pool. But one no less connected to Hollywood and its mythos.

Where others attempting to write on the subject of Marilyn Monroe (and there are reportedly somewhere near 700 books on the subject) have had difficulty is sculpting a portrait of the girl Norma Jean who became the legend Marilyn Monroe, Donald Wolfe manages to capture the full complexity of the woman and delivers to his readers perhaps the best and most satisfying recreation of her ever to have been brought to print.

Which makes the outcome, the inevitable if mysterious death, all the more tragic when it happens. As with a horror film in which members of the audience warn the actors not to open a door or to walk alone into the surrounding darkness, here the reader can only wonder:

Had Marilyn Monroe somehow lived through August 5, 1962, how many more years would she have had in front of her if she, at 36, had been able to go on with her life?