The Last Days of California 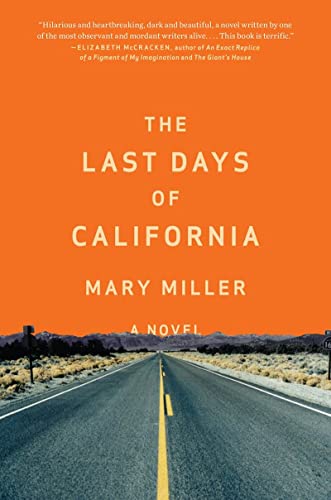 “Brimming with acute observation and inspired prose, Mary Miller’s The Last Days of California is a blessing of a book.”

As if simply coming of age—with all its inevitable angst—isn’t bad enough, coming of age just as the world itself is coming to an end is a whole new state of awful.

Rapturous it definitely is not. In fact, it’s an apocalyptic pain.

Before she’s had time to discover the meaning of life, love, or even found her very own boyfriend, 14-year-old Jess is bundled into the back of the family Taurus with her (secretly) pregnant, boy-magnet older sister Elise for a one-way road trip from Alabama to California with their disengaged mother and practically dysfunctional dad.

Dutifully dishing out religious tracts, they’re trying to save as many souls as possible along the way.

They’re getting ready for the Rapture, you see. That’s when they’re not eating junk food, bickering, or trying to freshen up in some tatty restroom. Still, at least their ersatz “uniform” makes that task a little less tiresome:

“I found a spot of something on my t-shirt,” says Jess, “guacamole maybe, that scratched off in flakes. The black King Jesus Returns! T-shirts did a good job of hiding sweat stains and mustard. . . .”

For her sister, the rebellious Elise, “wearing her King Jesus Returns! T-shirt with a pair of shorts that were so short you couldn’t tell she was wearing them,” the 2,500-mile trip is a bit of a joke.

For their evangelizing dad, so what if he’s lost yet another job—this is a whole new beginning.

For Jess, it’s the end of the world for sure. Or is it?

Slightly overweight, insecure, and prone to making the wrong assumptions, Jess slowly learns to save herself, helped along by a wry sense of humor, and the gradual realization that even in the most flawed of families, love really is the key.

Brimming with acute observation and inspired prose, Mary Miller’s The Last Days of California is a blessing of a book.