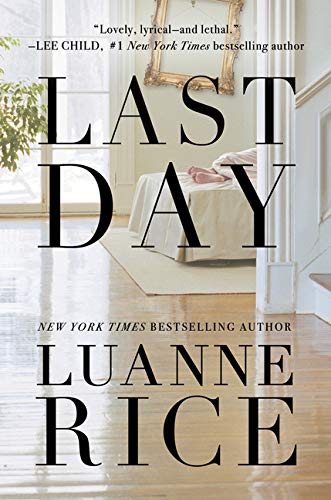 "Rice, the author of more than 30 books, is a master at writing descriptions and portraying story settings, a skill other writers admire and strive to acquire."

Luanne Rice's opening pages of Last Day illustrate elegant writing at its finest. Clear, crisp and eloquent—sumptuous, even—readers will be tempted to read the passages more than once for the sheer pleasure of it ignoring for the moment that they describe a crime scene. Yes. There is a dead body.

Someone has murdered beautiful, wealthy, accomplished, and very pregnant Beth Lathrop leaving her body in an expensively appointed, overly air-conditioned room that is so cold the silver frame of a photo frosted over.

The cheating husband Pete has an alibi, but everyone suspects him anyway, mainly because nobody likes him. Beth's sister Kate makes no secret how she feels:

"He's an arrogant jerk with an inferiority complex. He acts as if he's better than everyone—even Beth. But his feelings get hurt if you look at him sideways. Beth decided it was easier to let him have what he wanted. She isn't someone who likes to fight. . . . He likes getting his own way."

Others describe him as a creep, a liar, a cheater, "a dick" and worse. Even his 16-year-old daughter Sam doesn't want to be with him.

Intricately drawn complex, perfect and perfectly flawed characters form a wide circle of family and friends covering five generations. The males for the most part are unremarkable except for a couple of bad daddies. It's the women who are noteworthy, starting with grandmother Mathilda, a woman ahead of her time who chose not to marry but have children anyway, to a couple of modern day super independent women who chose not to marry or have children.

Kate turned her passion toward a career in flying:

"Kate had watched Beth and their two best friends—Lulu and Scottie—flirting and dating and talking endlessly about the exquisite torments of love and passion. Kate convinced them she didn't care about such things. She kept busy trying to outfly all the male pilots she knew, just as Mathilda had done in the war and beyond."

It's Kate who discovers Beth's body and calls the police. Detective Conor Reid arrives at the crime scene. Reid had, coincidentally, investigated a similar crime involving murder in that family before:

"Twenty-three years ago, the Woodward sisters and their mother had been forced into the gallery's basement, bound to each other with ropes and duct tape, while upstairs thieves had stolen priceless nineteenth-century landscapes. Reid had been the resident trooper and first on the scene."

The mother did not survive, but little girls Beth and Kate did. Reid's closely held belief is that if you rescued someone you were responsible for them forever. Now with Beth dead and Kate totally traumatized over it, he harbors tremendous guilt at what he sees as his failure to keep them safe.

Additional suspects are gradually added to the list as multiple twisty plot threads make their serpentine way onto the pages. Twist after twist is guaranteed to keep readers guessing all the way to the surprises in the final pages. (Don't peek.) The author deftly introduces each one accompanied by intricately detailed descriptions of people, places and things that are a sheer pleasure to read. Especially the houses and the scenery:

". . . Kate walked in the front door into a parlor that seemed designed for a tea party, with maroon velvet chesterfield sofas, burled yellow birch tables, a rosewood sideboard with crystal candlesticks at either end. The paintings on the walls were of cows and gardens, purchased from the gallery a generation ago by the first Edward Bryer—the current owner's grandfather."

". . . The stately white house (was built) in the midst of one hundred acres of forest and meadows sloping down to a tidal inlet . . .

". . . The clay tennis court was sprouting weeds, and the deep stone swimming pool was dry. But Harold Maxwell, the gardener, still came once a week, and the blue hydrangeas were as dazzling as ever. Black-eyed Susans, pink and white phlox, and bee balm grew tall along the stone wall circling the house. . . "

Beautiful writing, but there are some gritty scenes and references, as well. The crime scenes, for instance, and later, what it felt like to be murdered from the POV of the deceased victim. Forensic junkies will particularly enjoy reading the coroner's autopsy report.

Rice, the author of more than 30 books, is a master at writing descriptions and portraying story settings, a skill other writers admire and strive to acquire. The identity of the murderer will come as a shock. The clue, though seamlessly integrated and easy to miss, is definitely there early on.