The Last Campaign: Sherman, Geronimo and the War for America 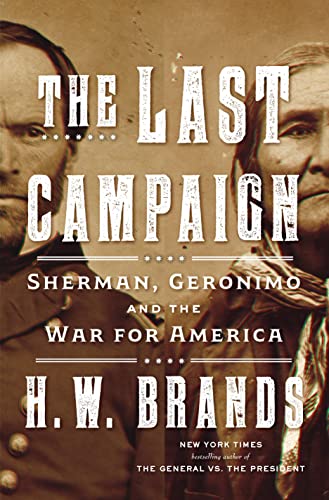 “H. W. Brand in The Last Campaign tells an interesting tale, an informative page turner for the general reader.”

A unified and revitalized United States had won, against itself, one of the world’s great wars but also against the largest assaults by Native Americans in its history. That the country would overcome the last resistance of the Native peoples of the West no one really doubted but with at what levels of success and failure? Mix into this epic story the first great wave of corporate greed, corrupt national politics, and a nation on the verge of becoming a world power. Geronimo, however, has hardly more than passing mention in this work.

H. W. Brand in The Last Campaign does make many thought-provoking, if broad, pronouncements. The author, for example, argues that even the first people in North America “knew life as a struggle: against nature for the resources required for human sustenance and against other humans who stood in their way.” The struggle for North America began eons before any Europeans arrived.

Geronimo and Sherman became famous but very different leaders in the last of this conflict. Brand writes of their mutual experience in a simple, straightforward way with engrossing prose that finds great meaning but with an easily readable text that even a general audience will enjoy.

The Last Campaign is not exhausting in detail about its subjects, but it is also not the standard recitation about Native Americans vs. the U. S. Army. Readers can easily acquire a new view of the Apache people over the movie/television stereotype starting with the first chapter, taken from Geronimo’s memoirs. Until grown, he had never seen a white man.

A chapter on William Tecumseh Sherman follows, again taken from the memoirs of the subject. Sherman’s early life is popularly known, but Brand writes of these backgrounds without character analysis or assassination. The result is something more familiar, more human than standard, often overstated, backgrounds based on too much supposition and too few records.

Brand with subtlety builds his greater story of the last great conflict between the “First Peoples” and the Anglo-American Manifest Destiny. Both Geronimo and Sherman lost their respective and much-admired fathers at the same age. Had these two leaders known one another well, they surely would have respected each other and perhaps even have been friends.

Sherman received his middle name in honor of a great warrior leader. He came of age as a reluctant soldier at the United States Military Academy during the removal of the Five Civilized Tribes, and other Native peoples, from the East for resettlement in the West. He did uneventful service in the removal of the Seminoles from Florida. He learned that Native Americans could wear down until they gave up. While stationed in California, Sherman witnessed the beginning of the gold rushes that would shape Native American policy in the West as it had the removals from the East.

Geronimo lost his mother, wife, and three small children in the Apache bands fighting with the Mexican settlements. Sherman lost his family and had another imposed upon him by the financial crisis his mother faced upon his father’s death. The lives of these two men would be driven by their different circumstances in very different worlds.

The American Civil War left Sherman believing that in war a defeated people “must feel its costs, and must recognize the greater costs to come if they continued to fight.” He warned that a divided United States would result in a country “forever at war” as in the Mexico of his time.

The Native American tribes used the Civil War as their greatest opportunity, their greatest resistance against the United States, although the Apaches played little part in that war within war. At that time, Geronimo nearly lost his life in failed campaigns of revenge against Mexican soldiers.

Sherman as the post-war commander of the Army west of the Mississippi River initially only concerned himself with the building of the Trans-Continental Railroad and avoiding as unnecessary the Indian war demanded by the few settlers. Toward that end, he argued for forcing the Native Americans onto new reservations, even without treaties, and sometimes for the extermination of tribes like the Sioux, culturally or literally. He created the famous Seventh Cavalry as a mobile strike force.

Washington, however, blocked Sherman’s efforts and even allowed traders to sell better guns to the Native Americans than what the army issued to its soldiers. Sherman wanted a military takeover of the Bureau of Indian Affairs and immediate action against any Native American resistance. Cost-conscious politicians stopped him. It is a story of corruption, gold, injustice, media, naivety, and patronage.

Brand in The Last Campaign writes a basic outline of the complicated history of post-Civil War United States Native American policies in the West as it related to Sherman. Geronimo has no place in this narrative until near the end of the book (page 281). By that time, the U. S. Army under Sherman’s direction had essentially defeated the Western tribes, although with limited resources, occasional setbacks, and political interference.

Geronimo’s Apaches seldom caused trouble and often essentially shared occupancy with the Army in forts established in the blazing heat of sparsely settled Arizona. “Raids, thefts, and murders continued” but the media exaggerated the atrocities with blame ascribed to all Apaches, not just to the actual perpetrators.

Vigilante posses of Americans, Mexicans, and Papago Indians (traditional enemies of the Apache) responded with a massacre that flew in the face of President U. S. Grant’s peace policy. Sherman called for largely abandoning Arizona to the Native Americans as not worth the cost of an Native American campaign!

General George Cook actually led the campaign against the brave, disorganized Apaches, few in number and largely armed only with bows and arrows. Crook was brave, efficient, honest, and humane. The massacre of an Apache peace party led to an 11-year guerilla war led by the Apache leader Cochise, however.

Cochise’s famed ally Geronimo escaped from imprisonment and reservation. He escaped to Mexico with his followers, where he had led raids for decades. Sherman obtained permission from Mexico to cross the border with the United States Army in pursuit.

Geronimo found himself caught between the U. S. Army and vengeful capable Mexican soldiers. He never had more than 75 first-rate warriors (the greatest gathering of Apache warriors seen in years) and that many men only once. The famed Apache leader held his followers together and successfully raided the United States from a refuge in Mexico despite the famous individualism of his people. Under Geronimo, the Apache “conquered, dispersed, and outlasted the rest” of the western tribes.

Geronimo led his relatively few people for years alternating between peace and war. Fighting a war of attrition, he knew he would ultimately lose. Geronimo made treaties with various American generals (but not Sherman) only to twice suffer arrest and have to escape.

Finally, under General Nelson Miles, Geronimo made permanent peace and lived out his life on a number of reservations as a celebrity prisoner. His “surrender signaled the end of the war for America—the ten-thousand-year struggle for the territory that became the United States.”

H. W. Brand in The Last Campaign tells an interesting tale, an informative page turner for the general reader. It does not work as a story of conflict between Sherman and Geronimo in the greater epic of the wars between the Native Americans and the Anglo African American expansion. The Last Campaign has annotation and illustrations.