The Last American Hero: The Remarkable Life of John Glenn 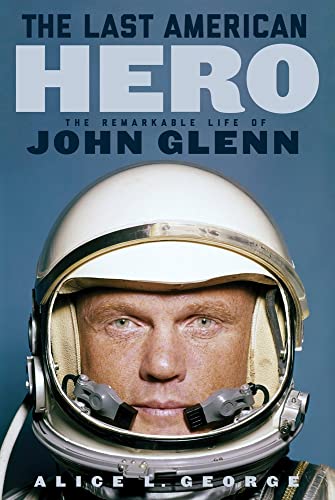 “The Last American Hero: The Remarkable Life of John Glenn captures the man and his time, his impact on space flight, and the nature of heroism and hero worship.”

At this moment in August 2022, a houseful of astronauts is 254 miles above Earth aboard the International Space Station. But what are the names of these men and women and for how long have they been there? Most people don’t know. The dangerous work of astronauts is now taken for granted. What gets attention is billionaires taking suborbital flights on corporate rockets. Space travel is a novelty.

It wasn’t always this way. Once upon a time a lone astronaut held the world spellbound, a story Alice L. George tells in her biography The Last American Hero: The Remarkable Life of John Glenn. Glenn was the first American to orbit the Earth, on February 20, 1962. It was the height of the Cold War and outer space seemed like the final battleground between the United States and the Soviet Union.

By this point, two Soviet cosmonauts had circled the Earth. Americans Alan Shepherd and Gus Grissom had made only suborbital flights, each for about 15 minutes from launch to splashdown. The United States was falling behind in the Space Race, a geopolitical contest with enormous implications. Glenn’s voyage changed the game.

The Mercury 7, the first class of American astronauts, were not just men: They were the epitome of what it meant to be male in America, as filtered through the NASA public relations machine and moneyed auspices of Life magazine. The image of astronauts as brave heroes with all-American wives and children was buffed and shined into something almost mythological. The Mercury 7 were United States’ shining knights in the Cold Ward crusade.

Glenn didn’t need any help from a PR campaign. He was authentic. A heroic fighter jock who fought in both WWII and the Korean War (the latter with baseball legend Ted Williams as part of his squadron). A test pilot who broke the speed record for coast-to-coast flight. A robust contestant on the popular TV game show Name That Tune, with his partner, ten-year-old Eddie Hodges. A man blessed with humility and genuine love of country. All that plus Glenn’s wife Annie, the only woman he had ever dated and ever loved. The two first met when they were toddlers.

Most of Glenn’s fellow Mercury 7 astronauts were the complete opposite of the straightlaced Glenn. They were hellions racing fast cars (provided to them by automakers for the paltry sum of one dollar each), hard drinkers, and serial womanizers who cheated on their wives with astro-groupies.

Glenn would have none of it. When word got to NASA that the press obtained a photo proving one astronaut’s extramarital indiscretions, Glenn was charged with bringing his associates in line. In a session that became known as “The Séance,” Glenn read his fellow astronauts the Riot Act, demanding that they “keep their pants zipped.” Alan Shepard, notorious as the top philanderer of the group, nearly came to blows with Glenn.

The program would never succeed with rancor amid the astronaut corps. Over time the two reconciled. When Shepard climbed into his Mercury capsule to become the first American launched into space, he was greeted by two presents from Glenn. One was a signed reading “No Handball Playing in This Area.” The second was a centerfold from a men’s magazine. “I’ll be damned,” Shepard later recalled, “Glenn’s become a damned prankster.”

George’s prose is dry throughout the early sections of the book, almost as if she were writing a lengthy Wikipedia entry instead of a comprehensive biography. But the book kicks in at the right moments, with two robust chapters describing Glenn's flight around the Earth and its unprecedented aftermath. George digs into a comprehensive story of the world coming together in what was the first real international media event. At New York's Grand Central Terminal thousands crammed onto the concourse where giant television monitors were installed for the public to watch the nonstop news coverage. On the other side of the country, prisoners on San Quentin’s death row were allowed to check on Glenn’s progress during their exercise periods. The United States shut down, with all eyes glued to television and radio reports.

Even the Soviets allowed their citizens to participate. Rather than jam signals from The Voice of America, the US radio propaganda broadcast into Russia, the Kremlin stood down while the news of the day unfolded.

What these millions of Earthlings didn’t know was that Glenn’s ship Friendship 7 was in grave danger. At Mission Control in Houston, a warning light went off on their vast control panels. It was possible that a landing bag had inflated, loosening the space capsule’s heat shield. If so, Friendship 7 could burn up during its descent. When informed about the condition of his spacecraft, Glenn handled the potentially deadly situation with his usual even-minded determination.

Glenn’s three orbits around the Earth changed the Space Race. It also changed his life. Glenn was an instant celebrity. A record four million people lined the streets of New York to catch a glimpse of Glenn and Annie while ticker tape showered the streets like a snowstorm. Fan mail poured into the Glenn home, with 350,000 letters from around the world overwhelming the local post office.

America’s newest hero was in high demand, with requests for countless speaking engagements for public, private, and military organizations; honorary degrees; and even to judge school science fairs. General Mills wanted to plaster Glenn’s face on a Wheaties box, offering him a million dollars for the honor. He declined.

His status as an icon was assured, but his future as an astronaut was over. President John F. Kennedy felt Glenn was an important asset to the American image around the globe and would not risk him getting killed in a second flight. NASA agreed. It was a sign of the times as to just how important people regarded Glenn’s breaking Soviet dominance in the Space Race.

In the years that followed Kennedy’s assassination, Glenn grew close to the president’s brother, Robert F. Kennedy, who convinced the now-former astronaut to run for senate in his native Ohio. Glenn’s 1964 campaign was thwarted when he suffered a concussion after falling in a hotel bathroom. But Glenn remained close to Robert Kennedy. Following RFK’s assassination, his widow Ethel relied on Glenn to comfort the Kennedy family in their hour of need. Glenn also served as a pallbearer at Kennedy's funeral.

Politics remained on Glenn’s agenda. In 1974 Ohioans elected hime to serve as their new Democratic Senator, a seat Glenn held for the next quarter century. At various points in this lengthy career Glenn served on the Government Operations Committee, Foreign Relations Committee, and Special Committee on Aging. As centrist in his political stances, Glenn was well-liked by his colleagues on both sides of the aisle. Jimmy Carter considered Glenn as a possible running mate in 1976. Glenn made his own run for the presidency in 1984, a short-run effort botched by a floundering campaign organization.

Glenn’s tenure in the Senate was not with controversy. He was one of the so-called “Keating Five,” a quintet of senators who accepted campaign cash from banker Charles Keating during the financial crises of the late 1980s. Glenn and Arizona Senator John McCain were found by the Senate Ethics Committee of having exercised “poor judgement,” but were otherwise exonerated of any corruption charges.

Perhaps the most notable aspect of Glenn’s senate career was his return to space aboard the Space Shuttle Discovery for a nine-day mission. His mission this time was as a sort of human guinea pig. What were long-term effects on an aging body through the rigors of space travel? This was a unique opportunity, a chance to compare contemporary data with that of Glenn’s Friendship 7 flight some 36 and a half years earlier.

On October 29, 1998, 77-year-old Astronaut John Glenn joined an international crew of five Americans, one Spaniard, and Chiaki Mukai, the first Japanese woman to fly in space. Project Mercury’s all-WASP all-male astronaut demographic was a thing of the past. The mission lasted for just under ten days, traveling at total of 36,000,000 miles. A far cry from Glenn’s historic three orbits.

George’s biography works in fits and starts. When it’s at its best, The Last American Hero: The Remarkable Life of John Glenn captures the man and his time, his impact on space flight, and the nature of heroism and hero worship. This is not a stellar biography of John Glenn, but when the book is in high gear it soars.