Larceny in My Blood: A Memoir of Heroin, Handcuffs, and Higher Education 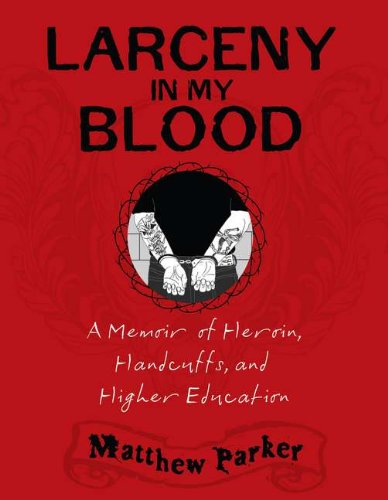 The most wonderful aspect of graphic novels is that an author is able to show, not just tell, an audience the story. This is a particularly powerful way to write an autobiography as the author not only tells you about their life, but allows you to virtually live it by placing the reader at the scene to witness events unfold.

There have been numerous examples of how this can be done pitch perfect: Perseopolis by Marjane Satrapi, Fun Home by Alison Bechdel, Stitches by David Small.

Unfortunately, nobody seems to have explained quite how to use the medium of graphic novels to author Matthew Parker, and his failure to show us rather than tell us his story is the major hurdle Larceny in My Blood just can’t clear.

The book begins with Matthew leaving prison in 2002 for the last time. He had decided that he had finally had enough of the junkie/dealer lifestyle and is about to enroll in Scottsdale Community College. We then get a background on the college, a quick explanation of how financial aid works, a few panels on why he can’t get a driver’s license (lots of unpaid fines), and then we are Matthew’s mother’s house.

Confused? Hang on then, we’re only eight pages in.

Matthew Parker was born in Bridgeport, CT. His parents divorced, and Matthew’s mother was left to raise four children on her own. Considering that her husband was an abusive alcoholic, this seems like a good move—until she realizes in order to make ends meet she needs to shoplift, which then leads to welfare fraud. She then progresses to drug smuggling.

What follows is her brilliant idea of turning it into a family affair. Enter Matthew Parker. At age 13, Matthew began selling drugs for his mother and became quite prolific: $20K in sales his first year. This life of crime, car theft, counterfeiting, drug dealing, continued alongside his mother, brothers, and sister through the years and across the country.

When Matthew finally decides after numerous stints in jail that he’s had enough, he enrolls at Scottsdale Community College, progressed to Arizona State, and finally obtains his Master’s Degree from Columbia. It is a very strange journey from school to school as he is constantly confronted with his past. Like most ex-cons, he has to deal with being judged by some and overwhelmed others eager to help him assimilate.

There are a number of stories being told by Mr. Parker. Choosing which stories to tell and which to leave out must have been a gut wrenching process. The most frustrating thing about the book is that the stories are incredible; however, the book careens wildly from tangent to tangent; and with no clear narrative it is easy to become disoriented and wonder what timeline you’re reading.

This is a slice of life that most people want to pretend doesn’t exist, or at least pretend that it doesn’t affect them. But these are the stories that need to be told. His bared to the bones honesty is commendable, and the fact that nothing really happened during his numerous incarcerations is intriguing for an audience that views prison as an episode of OZ.

The artwork does not help the move the story along; it is very flat and static.

Many panels showed characters staring straight out at the reader, almost as if you were looking at a photo album. Mr. Parker would have been better advised to collaborate with an experienced artist, familiar with graphic novels, in order to gain a richer story. Almost every panel has at least two lines of narrative telling you the story, and then illustrating the point he just made.

The reader oft wants to scream at the page numerous times “Show us or tell us!”

It has been a very long time that I have had such intense emotions about a book. I had to put this book down several times, and then force myself to go back. The mental whiplash I suffered in order to understand this author’s journey made me feel as strung out as Mr. Parker must have 24 hours after shooting up his last needle of heroin.

If one has never known a drug addict or an ex-con, I would definitely recommend that they read this book. This book is a fantastic guide to recognizing the manipulative nature of addicts and to understanding how hard it is for those in recovery to break those habits.

Sadly, it seems that the author still falls back on those bad habits as he details defrauding Columbia University for money to (as told to Columbia) purchase a computer and software in order for him to complete his graphic novel, but really for living expenses and a trip to Columbia to visit his girlfriend.