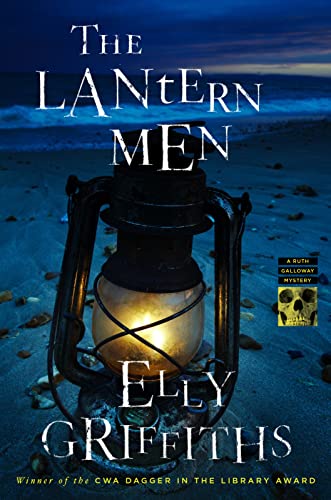 “Bringing the traditional British mystery up to date with this strong and driven sleuth—not a true amateur sleuth, but an active partner with the official investigation—is the best part of reading this ongoing series from Elly Griffiths.”

A forensic archaeologist with a rising career, Ruth Galloway’s made a major life change as The Lantern Men opens: Forsaking her beloved sea marsh home and the Norfolk university where she’s been mostly blocked from advancement, she’s taken a teaching slot in Cambridge. And with her daughter, she’s moved in at last with Frank, an American who loves her deeply and, she knows, wants to marry her if she’ll just consent.

But despite the rise in academic prestige, Ruth’s aware that she’s putting great strain on her heart: not just leaving the coast, but also walking away from Detective Chief Inspector Harry Nelson, father of her nine-year-old daughter, but securely married and also a new father to a son with his wife. Though Ruth’s aware that she can’t win her daughter’s dad as her own partner under the circumstances, that doesn’t erase the powerful bond that Nelson and Ruth share.

But when Ivor March, a serial murderer that Nelson and Ruth have always felt was holding back on some of his kills, pulls them together, there are frightening red flags, as Nelson reveals the latest twist:

“‘He said that he was willing to tell me where the other two bodies are buried.’

‘Yes. I couldn’t believe it. But he had a proviso. He always does. He can’t resist playing games. . . . He wants you to excavate them. . . . He won’t tell us where to look unless you do the digging. You don’t have to agree though.’

Ruth stands frozen with her hand on the car door. Ivor March wants her to be involved in the case. A serial killer not only knows her name but is requesting her assistance. Should she refuse? This isn’t her case, after all. She thinks of Frank’s words last night. ‘You’ve got a new team now.’ But, of course, deep down, she wants to do it. She wants to be the one to find the bodies.”

Frighteningly, the killer demands to meet Ruth first, and she won’t refuse: First, she’s eager to get back to the kind of in-ground exploration that engages all her knowledge. And second, it will mean working with Nelson, much better than not seeing him at all.

Yet the proclaimed murderer, Ivor March, is a master psychological manipulator. It’s clear he, like the groupies who adore him, savors being able to tug Ruth’s strings. He even somehow knows about Nelson and their shared daughter—which immediately means Ruth needs to worry about her child’s safety.

The book’s title comes from a myth of mysterious figures of the past, or perhaps even of the spirit realm, who light lanterns at night along the paths through the fens, nearby quicksand and pools notwithstanding, and lure unwary travelers to gruesome death in the muck and mire. March’s own past, as Ruth and Nelson probe from opposite directions, links up with a manipulative group of mingled sociopaths and do-gooders—Who can be sure which ones are which?—who’ve trolled the region for women in trouble.

Griffiths is a master storyteller, with two vivid mystery series underway. This is the more rapidly paced of the two (the other is set a half century earlier), and the unavoidable strands of Ruth’s passion—her work, her child, her lovers—act as potent forces while March’s apparently ongoing crime spree nets them all.

Series followers will want to know whether Cathbad, Ruth’s druidic ally, is involved again. Yes, but not deeply this time. Still, the investigative “team” may reunite as needed, as Ivor March’s own “helpers” multiply and risk rises. Suddenly, everything’s breakable, and lives, careers, and love are at stake.

Bringing the traditional British mystery up to date with this strong and driven sleuth—not a true amateur sleuth, but an active partner with the official investigation—is the best part of reading this ongoing series from Elly Griffiths. And it looks like there’s plenty of room for more.