The Language of Trust: Selling Ideas in a World of Skeptics 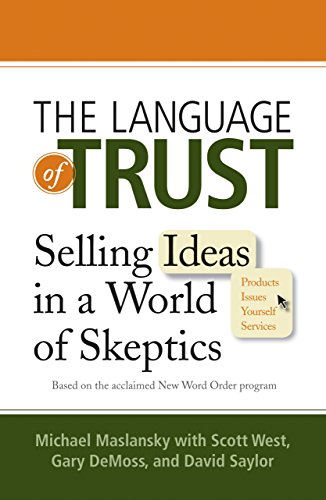 Communication has been described as being what a person hears, not what another  person says. Therein lies the crux of The Language of Trust, which states simply that, “[t]he language of trust isn’t about you, the communicator. It is about the audience—their  needs, their concerns, their fears, their hesitation, their need for truth and information.” This is the conceptual thread woven throughout this book.Language is divided neatly into four parts:Part One: The New Language of TrustNotes that we’re now in a Post-Trust Era, or PTE, where a healthy dose of skepticism accompanies every bit of information received. Part Two: The Four Principles of Credible Communication Provides rules to live by: Be personal, plainspoken, positive, and plausible. Part Three: The New Word Order Revisits the schoolyard admonition: listen before you speak. Part Four: The Medium and the MessageDiscusses utilizing technology to get a message across and concludes with 20 very entertaining things you should never say to a potential client/customer. The authors pepper Language with pertinent examples to illustrate how messages have changed through the years, both for the better and the worse. Consider that Tylenol spent years—decades really—telling people to take their product only to launch their Stop. Think. Tylenol. campaign in the 2000s, which was essentially a conversation as to dangers of over medicating with the product.

Compare the previous bit sparse bit of communication where much is said with three words, to Governor Mark Sanford’s cringingly self-absorbed fifteen-hundred word apology “that included intimate details of his extra-marital relationship and included Sanford confessing to feeling like a teenager and rhapsodizing over details like his mistress’s tan lines.” It’s hard to argue with the authors on that point and numerous others.

Written in a conversational style, the book manages to show impressive intellectual rigor as it lays out its four key points and hits upon everything from the business-book staple of Southwest Airlines to the recent nomination of Justice Sonia Sotomayor.

How much anyone gets out of Language really turns on whether or not one already agrees with the first sentence of this review. If one believes that communication—good communication—turns on the another person’s ability to hear, this book could sharpen existing skills.

If, however, the reader has not truly considered where communication actually happens, Language still deserves examination as it maps exactly how you can shape a message so that it can be heard, understood, and believed. And this is crucial whether trying to hit a sales figure or communicate with a loved one.

Governor Sanford should consider buying two copies.Reviewer Logan Lo is a small business consultant under the guise of an intellectual property attorney and a certified general real estate appraiser. He is currently an associate at the commercial litigation firm Woods & Lonergan in their Intellectual Property and Real Estate Practices and one of only 7,340 MAI-designated appraisers in the world. He resides in the Upper West Side of New York City.