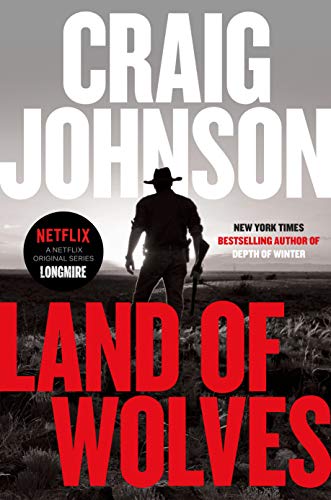 “Walt Longmire is one of the most beloved lawmen in contemporary American crime fiction.”

Walt Longmire is one of the most beloved lawmen in contemporary American crime fiction. He has been the hero of 14 novels by Craig Johnson, the focal point of an A&E/Netflix television series that recently completed its sixth and final season, and the center of an annual “Longmire Days” event that attracts 8,000 people to Buffalo, Wyoming (pop. 4, 584).

The publication of a new Longmire novel, then, is an event in itself. Land of Wolves, the 15th installment in Johnson’s series, finds our intrepid sheriff back in Absaroka County after having been “shot, stabbed, punched, kicked, run over, and generally abused in just about every way possible” while rescuing his daughter Cady from Mexican cartel kidnappers in the previous novel, Depth of Winter.

While recovering from surgery performed by doctors in Juárez to patch up his stomach, spleen, liver, and part of a lung, Longmire is called out to a snow-spotted park in the Big Horn Mountains to assist the county brand inspector and a National Forest Service officer investigate a dead sheep. Walt soon finds the itinerant shepherd responsible for the flock strung up to a tree in what may have been a suicide or may instead have been murder.

The fact that the shepherd was employed by the powerful Basque rancher Abarrane Extepares introduces violent and mysterious complications at a time when Walt is barely able to keep up with his deputies, let alone cope with a large, throwback wolf suspected of having killed the sheep that started off the whole thing.

Part of the pleasure that comes from reading a Longmire novel comes from Johnson’s use of the surrounding landscape as a complement to his central character. Both are rugged, challenging, and steadfast.

While searching for Extepares and his young grandson, who have gone missing, Longmire and his faithful deputy Victoria Moretti drive to the Middle Fork of the Powder River to investigate a spot where Walt thinks the old man might have sought refuge.

Johnson treats us to a flashback in which Walt remembers having spent time with his father at this spot many years ago. While his father fly fishes, Walt reads a book called The Outlaw Trail—A History of Butch Cassidy. Just upstream is a cave where Butch and Sundance may have hidden out. While Walt peppers his father with questions about the gang, he receives in response an early, important lesson about romanticizing criminals while forgetting that at the end of the day they’re just thieves, “plain and simple.”

Then father and son head upstream to check out the cave.

Longmire fits so perfectly into his surroundings that each square mile of Absaroka County, it seems, holds a special meaning for him. It explains in large part why he sympathizes with the lone wolf who may be hunted down and killed for a crime he likely didn’t commit (the murder of the sheep that started everything, remember), and why we’re not quite certain that the wolf actually exists and isn’t just a product of Walt’s imagination. A spiritual vision, as it were.

Longmire’s deputies, Vic Moretti and Santiago “Sancho” Saizorbitoria, serve as effective foils. A native of Philadelphia, Vic looks at the landscape around her with much more pragmatic eyes than her boss, while Sancho connects the team directly to the language and culture of the Basque community within their jurisdiction. And of course Henry Standing Bear, Walt’s best friend, brings not only an active sense of humor but a direct line to the spiritualism to which Walt is inevitably drawn.

Although Land of Wolves offers a somewhat less engaging story than the knock-down, drag-out adventures of the previous novel, it’s vintage Longmire, which makes it an outright pleasure to read.

Walt Longmire is one of the best crime fiction heroes around today. Period. And Land of Wolves is a Longmire novel not to be missed.