Land of Tears: The Exploration and Exploitation of Equatorial Africa 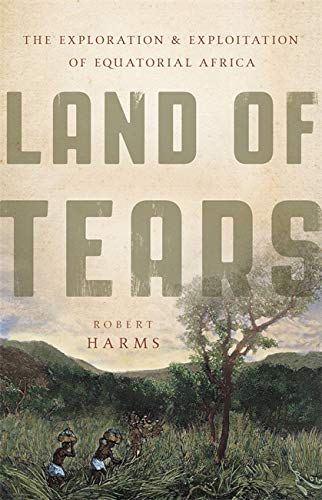 "Robert Harms tells this epic as an important chapter in the history of the world."

The Congo remains one of the last wild places on earth. Other jungles burn, ice caps melt, seas drown in garbage, and peoples disappear into globalization. Robert Harms documents the imperial history of Equatorial Africa, a place that, unlike the rest of the continent, exists without "a Mediterranean climate that was hospitable to European settlers."

The author starts in the ever-present forest of the Congo, in each of its three layers, "the second-largest rainforest in the world, after the Amazon rainforest." The region covers parts of several nations and it "occupies nearly eight hundred thousand square miles, making it almost as large as the United States east of the Mississippi."

The first inhabitants, Pygmies/Mbuti/Baka and taller peoples had cultures shaped by that forests, "not great empires, kingdoms, and chiefdoms" but "small-scale political units with flexible forms of leadership and authority." They had some 150 dialects and languages spoken by "450 separate ethnic groups." The Congo also had the anomaly of the kingdom of Chief Ngampei.

Jungles, the "rugged Crystal Mountains," and rapids largely kept the Europeans, who first arrived in the 1480s, from the vast interior and its people. In the late 1800s, "from the East African coast came Arab and Swahili traders . . . in search of ivory and slaves" (and after 1825) followed by European explorers. "Interest in geographic knowledge was exploding in Europe in the late nineteenth century."

In the 1870s, "European nations controlled less than 10 percent of the continent" but Africa faced change. What the agents of Belgium, France, Portugal, and "a coalition of Arab and Swahili traders." financed by Indian merchants, did became legend. "Ordinary people were flogged, enslaved, imprisoned, and shot; villages were abandoned; fields were left uncultivated; and common intestinal and respiratory diseases became lethal for lack of treatment."

The Europeans and Arabs "opened the floodgates to the pillage of the human and natural resources of the Congo rainforest," "ivory, captives, and rubber," each in turn to feed growing material demands in Europe, India, and the United States. "The inhabitants of the Congo basin rainforest were among the most brutally exploited people on earth."

"The region entered the European consciousness" when King Leopold II of Belgium had Henry Mortimer Stanley and Pierre Savorgnan de Brazza separately explore the region. Contrary to the image of seemingly unending jungle, Stanley "described towns two miles long with broad streets between rows of neat, well-built houses" of a large population open to trade. Stanley, however, already he a reputation for violent counters [with the natives that] had made him toxic in England." Competition between Stanley and Brazza began the great exploitation of the region.

Land of Tears follows three themes: the "impact of the internal slave trades," "the anti-slavery movements in Europe," and resource depletion of elephants for ivory that subsidized the slave trade and its depletion of rubber. The third theme concerns the native peoples "left to liberate themselves through flight, rebellion, or destruction of the rubber vines."

Robert Harms tells this epic as an important chapter in the history of the world. "The terrors described in these pages were instigated by Arab and European enterprises for the purposes of augmenting their profits in an increasingly globalized world." It is a story of "adventurers, commercial interests, national governments, and anti-slavery humanitarians," among much more.

The author does cover much in this thick volume.  Land of Tears, for example, including the history of the search for head beginnings of the Nile River and the schemes of Brazza to add the region to the reborn French Empire.

Harms' description of Equatorial African slavery appears both familiar and elsewhere unfamiliar to students of the contemporary American institution. With irony bordering on the bizarre, goods from Brazil and the Caribbean arrived in the Congo for the local internal slave trade while the British Royal Navy still patrolled the ocean to prevent the transport of slaves to America!

Harms carries the reader along swiftly, as a great adventure story will, with easy prose that leaves out nothing of the character of the world described. Land of Tears has annotation, illustrations, and maps.

"Testimony of the witnesses comes in a variety of forms, including diaries, letters, official reports, public lectures, travel books, and autobiographies." Harms chronicles the roles of the famous Stanley, Livingston, Leopold II, Tippu Tip, etc. but also the no less important but forgotten characters such as Alphonse Vangele, John and Alice Harris, George Cheney, Jan Vansina, and Henry Shelton Sanford, among others.

The author "given the wide variation in authorship and context [of the sources]" required that "each text must be evaluated on its own merits." "Historians of Africa might read the same accounts to learn what the travelers saw and what they were told."  "What the travelers observed while moving across the African landscape is often more significant than what they were doing."