The Land of Painted Caves: A Novel (Earth's Children) 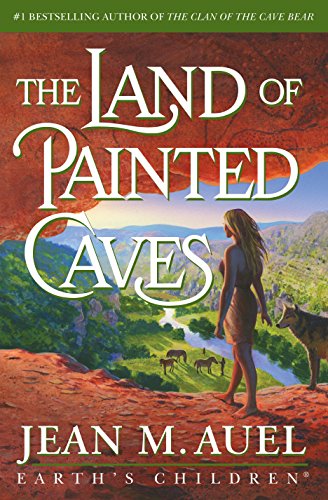 Only exceptionally talented writers can maintain a concept over a span of 30 years with a book series, and make her fans feel at home among old friends reminiscing together. Jean M. Auel is exemplary in this aspect. Each of her books easily stands alone on its own strength and as a collection are superb.

The Land of The Painted Caves is a love story that is enhanced by an intuitive tour of the then known world and prehistoric people living during the 10,000-year warming trend, extending from 35,000 to 25,000 years before the present. They live among woolly mammoths, huge aurochs (cows), lions, cave bears, and other animals—all immense by today's standards. Extensive exploration of the various painted caves is not merely for enjoyment, but many prove sacred, noted by the giving off of echoes when various songs and sounds are made.

Ms. Auel's unique style enhances the pleasure, both of the caves and her treatise on the development of civilization and communal knowledge and interaction. Ms. Auel spends much time and effort recalling earlier books in the series, which is needed since her Earth Children's books date back 30 years. The exploits and achievements of her heroine, mate and menagerie are extraordinary, making one reluctant to put the book down.

Greeting Ayla, Jondalar, their infant daughter, Jonayla, Whinney, Ayla’s trained mare, Wolf, whom Ayla raised from a pup, her other stallion Racer, and Whinney’s foal, Gray, is like meeting old friends again— expectant and thrilled to follow them on yet another exciting journey. The skills of Ayla and Jondalar, as well as most of the ice-age Zelondanii are remarkable and similar to techniques and medicines used today. Auel’s extensive and meticulous research into the flora and fauna of the time period, plus the magnificent cave paintings display a clear mental imagery of what it might be like living in pre-historic times.

While there is some conflict, such as jealousy (forbidden) against Ayla among Jondalar’s previous mates and by acolytes who resent the attention Ayla and her animals receive from the group, for the most part the Zelandonii ice-age people are extremely polite and accepting. There are rarely altercations among the people, and usually settled amicably by the First Zelandoni, who rules and serves Doni, the Earth Mother. It is her wish for Ayla to become the acolyte who succeeds her when she passes on to “walk the next world.” How different our present day society might be if our descendants held to similar traits.

Part two of the nearly 800-page novel breaks away from its somewhat pedantic former style, and surges forward, putting Ayla’s mortal and romantic life in jeopardy. The annual Summer Meeting is a much anticipated gathering by all the caves in various areas, many great distances apart. Ayla is late for this, sending her family on ahead, as she finishes her yearlong watch of the risings, settings, and phases of the sun and moon—part of her acolyte training. After completing her apprenticeship and receiving her calling, Ayla races on Whinney to get to the Summer Meeting that leads to the culmination of all the trials and tribulations of this star-crossed couple.

Be prepared for Ayla’s earth shattering sacred revelation—and the unforeseen climax to a long and treasured epic. Farewell to a beloved series that cannot possibly be forgotten.