The Lamplighters: A Novel 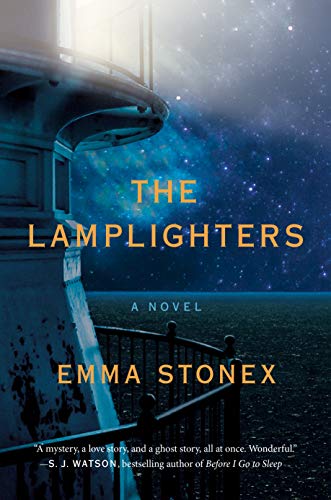 “With such dark and treacherous secrets, the men of The Lamplighters echo the force of the seas around them. The deepest mystery that Stonex then offers is: What use is the love each of them has known if it can’t finally rescue them?”

Emma Stonex is not a debut author—she’s written nine other books under three pseudonyms—but with The Lamplighters she steps forth proudly with a novel she’d prepared for in all that time, the first under her own name. It opens as a locked-room mystery, with the added quirk of the room being a lighthouse, and all three victims, if victims they are, missing from the deserted scene. Clocks halted at 8:45, table set for two (not three), every surface clean and bright. But the three keepers of this isolated lighthouse, known as the Maiden, off the Cornish coast of Britain, cannot be found.

It’s hard for the rescue team from Trident, the corporation in charge of the lighthouses, to grasp, since their orders suggest they are cleaning up some form of crime scene or at best isolation-induced madness: “Bring them off quietly, Trident said. Do it discreetly. Find a boatman who’ll keep it under his cap; don’t make a fuss; don’t make a scene; nobody needs to know. And make sure the light’s all right, for God’s sake somebody make sure about that.”

Then, exploring both 1972, when Arthur, Bill, and Vincent vanished without a clue to why or where, and 1992, when a persistent novelist insists on interviewing the three women involved—two wives and a fiancée—Stonex offers a boatload of possibilities. Yet the two that the rescue crew expected, murder and madness, consistently rise to the surface as the women slowly release details that they’ve hidden for two decades. The book rocks back and forth between those option like a ship rolling on waves, tilted now this way, now that.

Arthur’s wife, the oldest and most dominant of the three women (after all, her husband was the PK, the principal keeper of the light), refuses at first to coddle the investigating writer’s notions. “Lightkeepers aren’t romantic people; they don’t get nervous or look into things too much. . . . Arthur was never afraid of the sea, even when it was dangerous. He told me how, on a tower, the spray from the waves can come right up to the kitchen window during a storm—bear in mind that’s eighty or eighty-five feet above the water—and the rocks and boulders roll against the base, so it shudders and shakes. I’d have been scared, I think. But not Arthur; he felt the sea was on his side.”

Arthur’s inevitable secret turns out to be one he and his wife Helen bear together. But she has another source of guilt that she thinks he doesn’t know—although Bill, the second keeper does, and Bill’s wife Jenny may be more aware than you’d guess. As for Vince, it’s not a big secret that he’s spent time in prison, although only Michelle, his fiancée, will eventually know the worst of his criminal life.

Ruth Rendell, Shirley Jackson, Stuart Neville, all come to mind as Stonex ramps up the tension and hauntings. The Lamplighters holds its secrets close, forcing the investigator and the reader to pry determinedly at those deep-driven slivers of loss, jealousy, anger, and yes, even the violence of the cold and powerful ocean, until the last layers of revelation finally are torn apart.

With such dark and treacherous secrets, the men of The Lamplighters echo the force of the seas around them. The deepest mystery that Stonex then offers is: What use is the love each of them has known if it can’t finally rescue them?