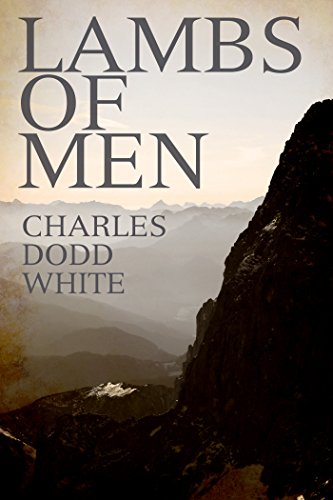 Here is a Southern literary novel that takes the reader back to 1920 and the back hills of the Carolina highlands where horses are still the main means of travel.

Reminiscent of the writing of Harper Lee and more recently, Charles Frazier, Lambs of Men moves through the landscape and era in America when the shadows of the Civil War still lay upon the people, as does World War I.

One of the main protagonists, Hiram, fraught with his battle experience of commanding troops, returns home to act as a Marines recruiter. He must also deal with his torn relationship with his father, Sloan, and find his own path. We travel through parts of the book with old Sloan as he battles drink and deep regret, and finally in an epilogue, we meet Hiram’s mother Nara as she faces the death of her favorite son.

All truths are hard won here between family and within the town. We witness battles in warfare, with renegade Southern Rebels, and with the ravages of alcohol at home. Though the dialogue in the early chapters is a bit stiff, the vivid descriptions of landscape read like prose poetry. Nature is a forceful character throughout this Appalachian novel. “The sun played at odds with the storm clouds all day long, intermittently baking and chilling as the scaling light pinned deep, definitive shadows across the road. Hiram ate his lunch in the saddle, watching the few songbirds that braved the conditions while the land opened up.”

This vivid lyrical sense of nature is joined to the action and drama of fierce encounters and great losses. Violence is portrayed with true power and lack of sentiment. Again, the hard truths are earned.

What I find most powerful in this historical novel, however, comes when the third-person author turns over the narrative to his characters in vivid and powerful storytelling. Both father Sloan and son Hiram take their turn around camp fires retelling past encounters in vivid scenes with sharp dialogue and revealing action. Here is old Sloan telling his father’s story in eight pages of italics.

“Now, Daddy knew those boys’ horses were a damn sight faster than poor old Jonan. So he turned straight off the road into some of the ugliest cane and briar you could imagine. All flooded bottom lands with the mud dredged up, smelling like a privy house. He knowed if them cavalrymen though anything of their horses, there wasn’t much chance they’d haul there after him.” The voice feels accurate and the narrative compelling.

The lambs of the title suggests fathers and their sons, but the book is about the women, too, and the great losses the suffer during wars and home battles. Though it deals much with warfare, it weighs heavily the cost and conveys William Faulkner’s claim for all true fiction, revealing “The human heart in conflict with itself.” Though a bit heavy on theme, the book's design is faultless. What makes Charles Dodd White an author to watch beyond his vibrant style is his great earnestness and compassion. A veteran himself, the author has painted a compelling landscape and given us a novel of the first rank in a time when war is still ever present in our lives.