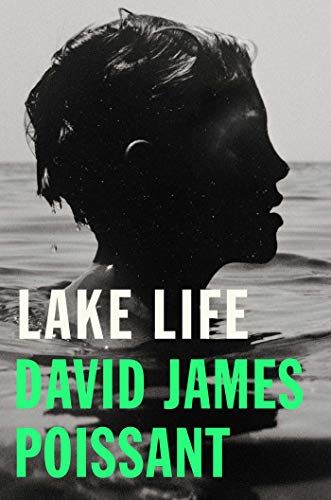 In this debut novel by acclaimed short story writer David James Poissant, three couples in the Starling family convene for one last weekend at the family’s North Carolina lake house. The couples: Lisa and Richard (soon-to-be-retired academics); their oldest son Michael and his wife Diane; their other son Thad and his boyfriend Jake.

On the first night, the adult children learn that their parents have decided to sell the house and retire in Florida—this weekend will be the family’s last ever in this house on this lake, where for decades they’ve vacationed. As if the last ever stay were not enough pressure for this weekend,  the family witnesses, their first afternoon on the water, a young boy drown.

Michael sees the boy fall off the boat, sees the boy’s teenage sister, napping and oblivious, sees the boy’s inflatable water wings “rocket from his arms like champagne corks.” Michael swims the distance, takes a huge breath and dives, going deeper and deeper. The lake is murky and opaque but finally he sees a hand.

“Later in the hospital, Michael will wonder. Say he’d had a drink that morning, just to calm him down. Say the shock of his parents’ revelation, the house for sale, hadn’t led him to drink so much the night before. He might have held on tighter, risen true.

“But this isn’t what happens. What happens is Michael kicks the boy. He doesn’t mean to, but a body underwater isn’t weightless and swimming with one arm is hard to do. The boy’s body drags. It’s kicked. Just like that, the hand is gone.”

After this happens on page seven, any prior agenda that any family member arrived with is now informed by this tragic event. Everything is measured against it, rendered more precious and more grave. Within all the intricacies of these interpersonal relationships, time is up. People want answers and they want them now. It takes the whole weekend for the boy’s body to bloat and resurface. Patience, among the Starlings, has run thin.

Most stunning in this debut novel is Poissant’s remarkable facility and fluency with point of view. It’s an achievement to alternate between two main characters’ viewpoints. But taking on six characters’ perceptions, six interior landscapes, six psychologies, six personal histories and pathologies, six ways of seeing and interpreting the happenings of the past and present—this is a feat. No character thinks or feels or talks like anyone else—and their voices and perceptions remain distinguishable and consistent throughout 40 chapters.

The effect is cumulative—by the third time we’re in Richard’s head, we know this dad and love him—his calm sweetness and his flaws. As Thad concedes later in the book: “Absence was the province of fathers . . .”

“Richard checks the anchor line. The sun is high, light traveling eight minutes and twenty seconds to bounce off the ball cap he wears to protect his head. The lake bed is six feet below the boat, the water three feet deep where he will cast. All things are, at this moment, as Richard wants them. Where he can’t impose order on his family, let him at least impose a pattern on the lake. Let him anchor where he’s anchored a thousand times before. Let him bait his hook with the day’s first fat, glorious worm. Let him cast as he was trained to cast by his father sixty years ago.”

Each consecutive time we’re in Michael’s point of view, we understand better the deep trouble he’s in with alcohol: “Michael rattles the ice in his glass. He has yet to find the warm, pillowy center of tonight’s drunk.”

Each time we’re inside Lisa thoughts, we see her questioning her own motivations for certain actions. Is she forcing the sale of the lake house as a way to punish Richard?

The more time we spend inside Thad’s head, the more we trust his perspective. Bipolar, depressed, and dependent on a “trinity” of medications—Xanax, Paxil, and Seroquel—to stave off suicidal thoughts, Thad comes across as solid and trustworthy. He may not have a job, he may be living off his rich artist boyfriend’s income, but he is right-headed and sighted, tender and fair:

“It’s a clear night, everything starlit: the bridge, the railing, the ravine. The guardrail is the highway kind, corrugated with rivets, scars where skidding cars have been repelled. Every dent is a car kept out of the air, every scrape a heart still pumping blood behind a wall of ribs.”

Each character’s trajectory is masterfully rendered, piecemeal, over the course of these three days. Poissant balances the distribution of viewpoint chapters: eight each for Michael and Thad; seven each for their parents, Richard and Lisa; and five each for the significant others, Diane and Jake.

The sensory descriptions this author comes up with are gorgeous and rare:

From Michael: “His mother laughs, but the laugh is a flower bloomed and dead and withered all at once.”

From Diane: “Soon, the sun will hit the water and smolder, a chemical spill, orange and pink and blue across the bay. Diane’s seen it a hundred times, and every seeing steals her breath. That tuck of silver water into sun, the water rainbowed like the wake a gas leak leaves behind a boat—this never stops being beautiful. . . . Even puddles, from the right angle, display a certain magnificence. Given enough light, Diane’s convinced anything can be beautiful.”

From Jake, about his art agent: “Frank coughs a cough like paintbrushes in a blender . . .”

From Lisa, about the infant she lost at one month old: “she kept a onesie in a Ziploc bag. When she missed her daughter—which was often, many times a day—she opened the bag and breathed her daughter in. She has the outfit still, though the smell went out of it long ago. Even now, she can close her eyes and summon June’s scent with a thought—the damp sweetness, like maple syrup strained through moss, or muffins lightly burnt.”

One small weakness toward the end of the book involves Thad and Michael coming upon a dead deer someone hit in the road. So much has already happened that night, and so much is about to cascade and collide into the next scene—a collective reckoning. The doe and her fawn feel like an artificial insertion, an unnecessary interruption to the novel’s momentum. What the dead deer scene achieves—a hammering home of themes of maternity and abandonment—has already been established so well by Poissant, and through more organic means:

“Moments like these, a corner of Michael’s brain lights up. It’s the corner that distrusts sentiment, that tells him not to fall for shit like this, that keeps him safe from emotional manipulation at all costs.

“But not tonight. Tonight that corner of his brain stays dark, and he has only to look into his mother’s eyes to know that he is loved.

“And any part of him that wants to dismiss this truth as childish is dwarfed not by the love that he returns—slender in comparison to hers—nor by the guilt he feels not sharing equal love, but by the certainty that to bring a child into the world is to surrender your happiness to someone else, to trust your heart to cavalier, unsteady hands.

“To have a child is to ruin yourself, forever, in the name of love.”