The Lady in the Van: And Other Stories 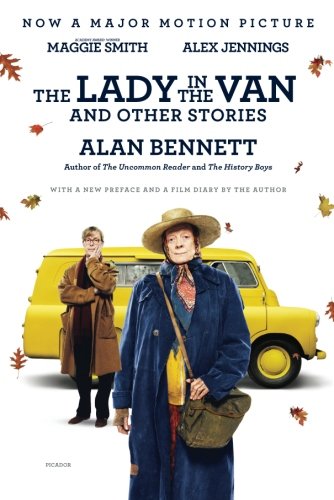 As acts of kindness go, it was a pretty big one.

And one that surely must have seemed as if it could and would never be repaid.

When a young British writer named Alan Bennett allowed a nearly homeless old woman to park the old wreck of a van was colored a particularly awful shade of yellow—the van in which the woman had been living for some time and had recently come to park on the street in the up-and-coming London neighborhood in which Bennett was living in a fixer-upper all his own—he surely must have come to the conclusion that he was nearly as dotty as she was. Or at least his neighbors must have reached a similar conclusion: The two of them deserved each other.

But when the woman, Miss Shepherd (as she was known, although their came to be some doubt as to whether or not that was actually her name), was threatened with having her van towed for parking it on the street, Bennett agreed to the new arrangement, one that sidled the door of the van with his own front door, in his own driveway, making for very close quarters.

Surely when he awoke the first morning and looked out to see a yellow van more or less blocking his view of the world he could have never suspected that the arrangement would stay in place for well more than a decade.

Or that this act of kindness would, in the end, morph into an annuity for the author, as the short story that he based on their relationship “The Lady in the Van” itself morphed into a play (starring Maggie Smith), and then into a film version (again, starring Maggie Smith), and, now, into something of a publishing event in two volumes, the first of which represents the original story along with two others of Bennett’s best and the second of which presents the screenplay for the movie.

In other words, Alan Bennett is having “a moment.” And a well-deserved one it is.

Those who might mistakenly think themselves unfamiliar with his work need only be reminded that both the theatrical and film scripts for The History Boys were his and that he has long staked his place among Great Britain’s best and brightest playwrights and authors.

But it is that lady and her van that have always been Bennett’s biggest bounty.

And reading it again after the passage of a good, long time is pure pleasure.

Like this bit, about the lady and her van:

“This van (there were to be three others in the course of the next twenty years) was originally brown, but by the time it had reached the Crescent it had been given a coat of yellow. Miss S. was fond of yellow (‘It’s a papal colour.’) and was never content to leave her vehicles long in their original trim. Sooner or later she could be seen moving slowly round her immobile home, thoughtfully touching up the rust from a tiny tin of primrose paint, looking, in her long dress and sunhat, much as Vanessa Bell would have looked had she gone in for painting Bedford vans. Miss S. never appreciated the difference between car enamel and ordinary gloss paint, and even this she never bothered to mix. The result was that all her vehicles ended up looking as if they had been given a coat of badly made custard or plastered with scrambled eggs.”

The surprise of the volume is not how good a friend the “Lady in the Van” remains, but, instead, the presence of another story, “The Laying on of Hands” that is its superior. It is the story of a memorial service for a man who is not quite famous, not quite infamous, but certainly well known and well-regarded enough to have the service stuffed with “names.”

Best not to know more, because this tale—stuffed as it is with Bennett’s usual turn of phrase and acerbic sense of humor—deserves to be read in ignorance.

But consider this brief bit from the rather long story.

Our narrator is a priest named Geoffrey whose job it is to conduct the service. Rather shy, rather dull, and rather ill prepared for the service—most especially because Father Geoffrey had a rather serious secret that had been shared between himself and the deceased—he quakes as the service approaches:

“The truth was it was God that Geoffrey didn’t trust. Irony was always the deity’s strong point and to afflict a transgressor as timid as Geoffrey with such a disproportionate penalty might appeal to the Almighty’s sense of cosmic fun. It was unfair to God, he knew, but he’d always felt the deity had a mean side and on one of his reports at the theological college his tutor had written, ‘Tends to confuse God with Joan Crawford.’”

The third story, “Father! Father! Burning Bright” ranks third among these three very good stories, but is itself a very pleasant read.

Published in celebration of the release of the movie, The Lady in the Van and Other Stories reminds us again of just how talented an author Alan Bennett is and how worthy these stories are of a first or second look.