Lady of a Thousand Treasures (The Victorian Ladies Series) 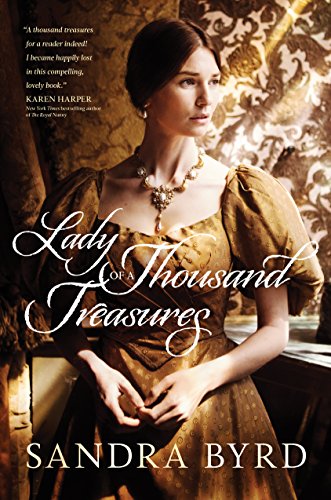 The novel opens in September 1866, in Oxfordshire, England. Eleanor has her hands full: not only is her elderly uncle in failing health, but she begins to suspect that Clarkson, the firm’s associate, has been squirreling away some of the fine pieces from their collection. Then, before Lord Lydney dies, he appoints her trustee of his legendary collection of antiques.

Enter Harry, Lord Lydney’s son, who once had been Eleanor’s love interest until a sudden cooling occurred. He returns to England with the Vieros, an Italian family from Venice, that have transported their fine glassware to England. The Vieros’ wish to save their priceless treasures from the Garibaldi revolutionaries who are looting fine art establishments in Italy.

Eleanor suspects that Harry is captivated by the gorgeous Signorina Viero. This is further confirmed when she opens a posthumous letter from Harry’s father, Lord Lydney. The letter informs Eleanor that Harry had been keeping close company with the signorina and had refused to come back to England when his father had asked.

Thus, Eleanor must shoulder the running of her father’s business and the management of the trust, all with a broken heart. Though Harry gives her a mustard seed as a token of his affection, she has little faith in his professed attachment. “Still . . . the rich promise of the past and the emptiness of the future entwined our arms as the skeletal wisteria entwined around the summerhouse.” Skeletal indeed—Harry distances himself from her and seems to be forever in the company of the signorina.

Though Eleanor was trained in antiquarian appraisal at her father’s knee, she never had the full responsibility of running his business. Now that she is in charge, she learns that the elder Lord Lydney may not have been trustworthy. She soon learns the hard way that the antiquarian world is populated with “looters, thieves, the rich and covetous.”

After she points out a fake urn amidst Lord Parham’s prized Grecian collection, Clarkson lectures her. She is “never to embarrass a rich man.” Eleanor realizes, her confidence failing, that she may be able to appraise antiques, but she has much to learn about fraudsters in the antiquarian sphere.

The author creates a believable Victorian Gothic culture in the detailed, rich environment that surrounds Eleanor. The sights, sounds, and smells of the antique trade and British country homes enhance the scenes. Not to be missed is the wonderful chapter when Eleanor lands in debtor’s prison toward the end of the novel. Sandra Byrd’s fine description springs to life in such detail as Eleanor’s prison plank, covered with “a rough feed sack which had been stuffed with coconut fibers.” Eleanor wonders in horror what kind of rats may be worming their way in and out of her pillow.

For readers seeking strong writing that gives extensive background in Victorian England’s antiquarian trade, this novel will be very satisfying. For those wishing a strong romantic theme, one might look elsewhere. Yet, in all fairness, this novel reflects Sandra Byrd’s excellent historical research and meticulous use of period detail.