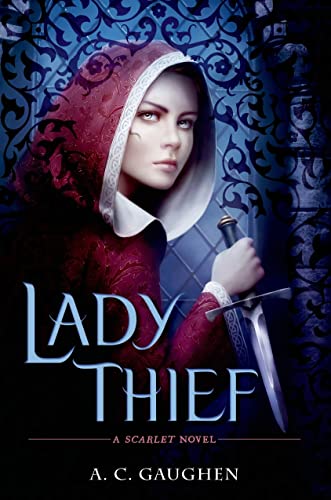 Lady Thief is the second book in A. C. Gaughen’s Robinhood series. In Scarlet, we met Rob, Big John, and his outlaw fellows as they tried to keep the poor town of Nottingham afloat despite the evil sheriff. The slowly blooming love between Scarlet and Rob does not (yet) have a happy outcome, and Scarlet is forced to marry against her wishes.

This is an ingenius world that Gaughen has created. Though some would refer to the Scarlet novels as a Robin Hood “retelling,” that term implies that some other text is the authority. But that’s not quite right. The legends of his Merry Band who steal from the rich to give to the poor were part of a long storytelling tradition, written down in many and conflicting fragments throughout 800 years of English history. There is no one proper telling, and thus Gaughen’s unique take on the stories is not a perversion of existing tales, but a true interpretation.

Gaughen’s twist is to imagine that the traditional characters of Will Scarlet and Maid Marian were actually the same person—that Marian hid in a boy’s garb to conceal her true identity.

In Lady Thief, hiding no longer works for Scarlet. She is forced to play the part of the dutiful wife. Awful Lord Gisbourne offers her a deal: an annulment for some dutiful playacting while the prince is in town.

Like the first book, Lady Thief is carefully written in a historically consistent first-person voice. The effect is a beautiful, personal variety of storytelling rarely found in works of young adult literature:

“I forgot about this—the silly labor of baths. Fair shamed by it, I stashed my knives by the shutter as they left, then watched as the servants first brought the basin to the chambers, then pail after pail of water warmed in the kitchens and sloshed cold by the time it made it to me. I didn’t mind that much—I were used to bathing in colder waters—but I were meant to sit in the half-empty basin while they poured it over me, slow and waiting for more water.

“Then the lady servant set upon me with soap and cloths, and that part were a far cry better than bathing in the lake.”

At once an adventure tale, a love story, and a study of good versus evil, Lady Thief raises the stakes set out by Scarlet in every possible way. Rob is visited by demons that serve to deepen his character. Politics plays an ugly role. And poor Scarlet will do anything it takes to untangle her mistakes—if only she could get a fix on the proper path.

Readers waiting for more of Scarlet and Rob’s love story will not be disappointed. Yet neither will they be perfectly satisfied. The happy ending seems within reach, until the very moment it is yanked away. Lady Thief is book two of a trilogy. The hair-raising action must continue in the next installment.