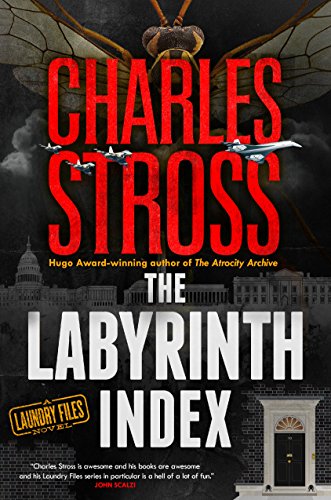 “It’s rare to find a genre novel so satisfying in its commitment to political realism . . .”

Charles Stross’ Laundry Files series is an odd, tentacled creature hunched on the bookstore divider between the shelves for fantasy and horror. The premise is arcane but unexpectedly charming: Magic is essentially mathematical, which wasn’t really a problem until computers exponentially raised the rate of mathematical calculation, weakening the walls of the universe and allowing the return of Lovecraftian horrors. The agency in charge of dealing with these horrors is a division of the British Civil Service, and is comprised almost entirely of press-ganged computer scientists and irritated philosophers.

If this seems deliberately silly, well, it is. When the series began with The Atrocity Archives (2004), Stross was engaged in gentle satire of both save-the-world fantasy-horror novels, and classic British spy fiction, a pattern maintained over the first four novels.

As the story-universe acquired more depth, though, he declared his intention to abandon the pastiche form. The stories from there gain depth and darkness, though they never entirely lose the workplace humor that launched the series under the tagline, “Saving the world is Bob Howard's job. There are a surprising number of meetings involved.”

Though Stross is no longer engaged in deliberate pastiche, Laundry Files’ links to British spy fiction continue. As Case Nightmare Green (the return of the nameless horrors) unfolds and the administration turns hostile to the overworked cast, John Le Carre’s Smiley novels echo through the pages. This isn’t a question of tone and language, but of worldview.

The Laundry is as humble and eponymous as Le Carre’s Circus, and the administrative scramble of first Bob Howard and later the Senior Auditor carries the trust-no-one psychic mist of Tinker Tailor Soldier Spy. Lamplighters visit safe houses and wild-eyed desk jockeys are called on to execute the desperate measures that desperate times call for.

The Labyrinth Index begins in a dystopian England now ruled by The Mandate, the human avatar of a Lovecraftian horror. Executions take place regularly in the Tower of London, and a pyramid of skulls is rising on the site of the Marble Arch.

However, Stross emphasizes that the Laundry Files universe diverges from our own. Case Nightmare Green came into full effect in early 2014, pre-empting the Scottish Independence vote, and predating/avoiding both Brexit and the 2016 American presidential election. Any similarity between The Mandate and another easily distracted, violent demagogue with a taste for televised theatrics is purely . . . coincidental.

Much of The Labyrinth Index actually takes place in the United States. The UK is ruled by an evil, ancient god, but the Americans have a more pressing problem: the presidency is missing. The president, as it happens, is also missing, but that’s less alarming than 300 million people simply forgetting (with magical assistance) that the presidency exists.

Mhari Murphy, former HR manager and current PHANG (Person of Hemophagic Autocombusting Nocturnal Glamour, an accidental vampire) is dispatched with a handful of still-recruitable agents to locate and liberate the President of the United States. But neither she nor any of her team have field experience. Like Smiley’s people, post Tinker Tailor, the Laundry is blown. Only the oddest of their oddballs can move safely in an America patrolled by dragons and secret police.

The complexity and absurdity of Stross’ books suggest escapist fantasy, but like its predecessors, The Labyrinth Index is more than that. Stross is a former computer scientist and a shrewd cultural observer. He creates his thrillers in a world as politically complex as our own.

The Laundry Files fuses horror and political satire into a novel of dark insights and deep discomfort. Well-meaning civil servants may oppose their governments, but that opposition is always compromised. Jaded women in business suits quote Leonard’s Cohen’s “First We Take Manhattan” as a kind of shibboleth. Every attempt to do better collapses into a scramble of harm-reduction. It’s rare to find a genre novel so satisfying in its commitment to political realism, even at the expense of the happy ending.