Labor of Love: The Invention of Dating 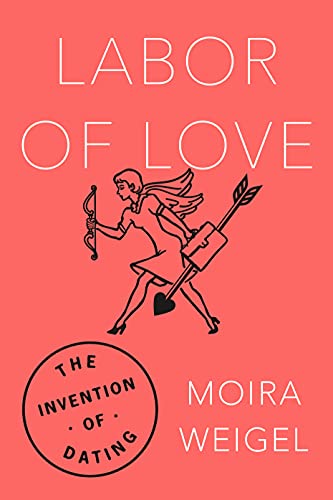 Labor of Love: the Invention of Dating is the witty title of Moira Weigel’s entertaining history of “dating” in the U.S. from its alleged origins in the late 19th century until the present. She defines dating as “the form that courtship takes when it takes place in the free market.”

Dating is envisaged as an asymmetrical relationship “work for most women and recreation for most men” and “if marriage is the long-term contract that many daters still hope to land, dating itself often feels like the worst, most precarious form of contemporary labor: an unpaid internship.”

Weigel has a number of insightful things to say about dating in college and in the gay community; the effects of the HIV/AIDS epidemic on dating habits; and the impact of contraception and of Assisted Reproductive Technologies such as egg-freezing and in vitro fertilization on the start and continuation—or otherwise—of heterosexual and same-sex relationships.

She references a wide range of resources including the work of one of the big beasts of Second Wave feminism, Betty Friedan, and reluctant feminist Helen Gurley Brown, editor of Cosmopolitan magazine, whose book Sex and the  Single Girl continues to resonate for contemporary daters through such popular television shows as Sex and the City.

The rather trite closing chapter in which the author reflects on “love, sex and romance” in her own life does less than justice to the wealth of interesting material presented earlier.

Here and elsewhere the book would have benefited from being built around a more clearly articulated theoretical framework.

The Elephant in the Room, or the Straw Man with which Weigel seems to take issue appears to be that powerful American ideal of Romantic Love, which she sees, presumably, as having been gradually replaced by a free- market “dating” mechanism which is more transactional.

In fact marriage—particularly heterosexual marriage—has always had a strong transactional and economic element, even though often overlaid with myths of being “meant for each other” on some higher sphere. This is particularly the case where the family is a primary economic unit, or there is property that needs to be properly transferred to legitimate heirs. “Bride-price” and “dowry” eased the negotiations.

With women’s greater economic empowerment and the technological improvements that have uncoupled sex from marriage and marriage from reproduction, one might expect relations between the sexes to become less transactional and more about simple lust or even pleasure.