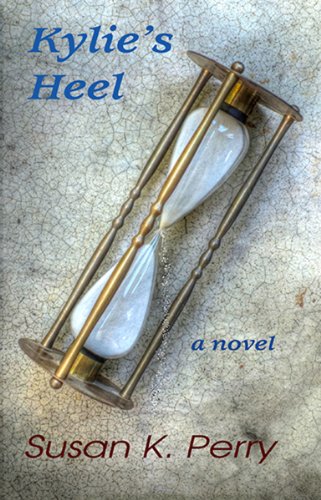 Opening the pages of Kylie’s Heel the reader is brought quickly and intimately into the world of Kylie Morgan, columnist and rationalist; her second husband Flann; her twin sister and born again Christian missionary Phoebe; and Kylie’s teenage son Dorian who, with his aunt, travels to West Africa on a mission to build a medical center and to spread the gospel.

I prefer to read something with a bit fewer “touchy-feely” emotions and less chit-chat. For me, the sidebar stories in Kylie’s Heel slowed the reading process and the enjoyment of “watching” Kylie deal with what most would deem an impossible conflict.

Author Susan Perry brings the reader into the world of a first person narrative in a semi-traditional Hollywood, California family. Mother Kylie is a humanist and writes a column for the local newspaper titled Rational Woman. Her life revolves around her son, second husband, and her work—a very typical character for what begins as a pretty typical story.

Son Dorian, Dor to those in the family, is taking his first real adventure away from the nest, and mom is rightfully concerned. It is a mission to Ghana, which is, after all, in the “deepest darkest Africa . . . ,” at least for this book and in Kylie’s mind. Twin sister Phoebe, a born-again Christian and the less rational of the two, is playing chaperone so trust in her ability to keep young Dor safe seems to flow just between the printed lines.

Ms. Perry’s work does a few very nice things. First, she delves into our imaginations early. Our hero has a number of dilemmas concerning Dor’s adventure, all personal and all needing to be resolved before Part 2. Following the trail of thoughts and discoveries was quite enjoyable, with only the minor conflicts of faith, spirituality and trust in the first 100 pages.

Kylie’s essays for a local paper are scattered throughout the story and provide some acumen in to our storyteller’s insights on life. They are also written in a second voice, something that is most difficult, even for a seasoned writer. Though wonderful and providing the reader with a door to help understand Kylie, there are not enough and they seem to flow with the story, not directing the story.

It is the relationship Kylie has with her sister and Phoebe’s belief in God that strikes the reader quickly but is not addressed until late in the story and even then could have been made stronger.

Dor’s relationship with his aunt appears to be on a firmer base, his adventurous aunt who travels with her small church to treat the poor and spread the gospel.

Of course, there is also a cast of characters that seem to move in and out of Kylie’s story sometimes providing insight, sometime not. Not that there must be a reason for every word in a fiction of family concerning faith in a god, in rational thinking and in each other. Like real life, sometimes the side stories just seem to exist willy nilly.

It is the kidnapping of Dorian that gets the book moving forward, though it takes a long while to get there, and it is not a subtle shift in the camber of the story. Then Kylie’s world falls apart—or at least it should.

The reader is being invited to a place most stories do not travel, the inner daily world of the parent of a kidnapped child; the daily activities that must take place not only for the child sake, but to maintain some level of personal sanity. However, delving into this part of life seems to be a trip ill-conceived by the author. I cannot imagine how I would act if my son were kidnapped in Africa, but I could not feel Kylie’s horror, anxiety, or fears. I was confused as I traveled down the streets of old Hollywood with Kylie, into coffee shops and talking with neighbors.

Ms. Perry does a fine job speaking in multiple voices in this tale, but loses the essence of the deep dismay any parent would have in this situation.

This is Perry’s first brush with fiction. As a first project, it is done well. It is hopeful she follows up with a second book showing stronger emotions, fewer sidebar conversations, and a more direct line to the conflicts. The read would be smoother and turning the pages more enjoyable.