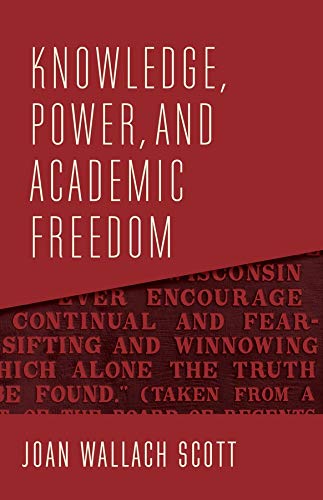 “Higher education in America is being rapidly reshaped under conditions of unprecedented volatility.* The very notion of the university as a public good is under wholesale siege. Never before has there been such a paucity of confidence in the value of higher education by a skeptical public.”

Tenure-track faculty may hold one of the last jobs in America where they largely control the means of production. They are not told what research problems to pursue, how to pursue them, where to disseminate knowledge, or how and what to teach. The academy is much like a medieval guild—an association of craftspeople in pursuit of a common goal and good (the production of knowledge in the pursuit of truth). In this guild-like system, faculty are charged with evaluating and assessing their fellow academics’ achievements and performance. Taken together, this is what constitutes academic freedom and serves as the bedrock of the modern university.

This privileged status, however, is eroding under intense and volatile forces of change. States have drastically cut back funding for public higher education; raising students’ tuition and debt; undermining public confidence in the value of a college education; and challenging the importance of free and critical inquiry.

In 2011, 41.5% of all faculty were part-time adjuncts, 19.3% were graduate student instructors, and 15.7% were full-time, non-tenure track. The rigorous production of knowledge and its dissemination in support of the public good is clearly losing value in a neoliberal calculation predicated on a fast-food model of cheap, fast, and homogeneous. And the neoliberal zeal for privatizing everything directly undercuts any notion of a public common good.

Knowledge, Power, and Academic Freedom rings the alarm at how quickly higher education has lost its once-vaunted status as public good has morphed into a private good. The book is a made up of a series of essays on academic freedom that arc across definition and history, knowledge/power, civility/affect, state interventions, and free speech.

Chapter One interrogates the definition and history, which underscores the fluid and contingent nature of academic freedom concept. Most interesting is Scott’s discussion of the tension between academic disciplines and the individuals within them. Disciplines provide historically constituted institutions for the organization of knowledge and ordains the practitioners who pursue it.

There is baked-in conflict between canonical, institutionalized forms of knowledge (received wisdom) and individual attempts to challenge and innovate beyond those boundaries. The keepers of orthodoxy are on constant patrol for the rebellious and revolutionary. What is fascinating is that orthodoxies—with all of their weight of legitimacy—historically crumble under a barrage of intellectual challenge.

Chapter Two delves into the struggle for the soul of the university as the corporate business model descends on higher education, driven by big donors with dollar-power clout and many other external actors. This pressure can be traced to the dawn of the 20th century. Recall that corporate capitalism was, in its heyday, spawned by the industrial revolution. Those disciplines most critical of the myriad negative social effects of little-regulated industrialization were seen as vulnerable to pernicious corporate interests. Academic freedom, then, was designed to protect the social sciences and humanities who are often inconveniently and uncomfortably critical. Of course, Scott notes this also plays out internally through the very disciplinary politics of ideas that pits firebrands against the orthodox. In both instances, academic freedom is an imperfect solution to forces that press against intellectual change.

Chapter Three explores the contours of academic freedom amid assertions of faculty incivility. Incivility is a sliding signifier of transgression in tone and content. She notes that this plays out in several different ways. First, faculty engaged in forms of public speech that are politically charged may be deemed uncivil. This also has an internal variation when students who find legitimate pedagogy decentering and then lay claim that the discomfiting discourse and practice is uncivil.

Taken to one extreme, we can see this embodied in deep controversies about polemical speakers on college campuses as delivering a form of hate speech. Determining real transgression against more ordinary, though perhaps imprudent speech, is a deep challenge. Put another way, how do we understand the line between obnoxious speech and abusive speech?

Chapter Five discusses the sometimes fraught relationship between public universities and the state. There are plenty of recent examples of aggressive intervention by states into the internal affairs of universities. Governors, state legislators, and boards of trustees pressing on broadly arrayed issues ranging from curriculum, systems of governance and tenure, and the faculty hiring process. To this we can add that higher education is also seeing mergers, closures, and other highly transformative moves under conditions where those very universities have seen state support erode drastically—the slow privatization of a once public good.

The book then meditates on outside pressure, most notably from conservative organizations, to intimidate and limit academic freedom, while, ironically, championing free speech. Take, for example, the “Professor Watchlist” published by Turning Point USA that is aimed at calling out professors they deem radical. On the one hand, there is tremendous zeal to censor ideas in the academy that are threatening (academic freedom) while championing types of speech they support and contend is stifled by left-leaning academics (free speech). Scott adroitly points out that the two, though often conflated, are markedly different. Academic freedom is about expertise, quality, and rigor, whereas free speech is about personal opinion no matter how untethered.

Higher education in America is being rapidly reshaped under conditions of unprecedented volatility.* The very notion of the university as a public good is under wholesale siege. Never before has there been such a paucity of confidence in the value of higher education by a skeptical public.

Joan Wallach Scott’s Knowledge, Power, and Academic Freedom is an astute and critical analysis of the erosion of higher education in the public imagination. It serves as a full-throated defense of the core ideals—academic excellence and the authority of knowledge—that made higher education a pillar of American democracy and against forces that would “elevate mediocrity as a heroic virtue.” We should all listen carefully and act decisively, for our very future is at stake.