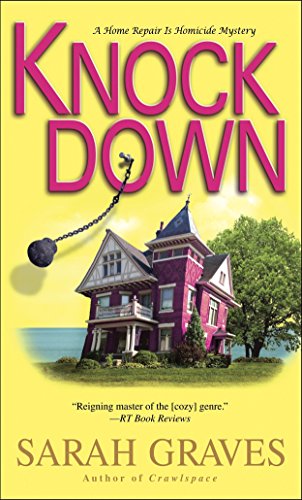 Knockdown is not a whodunit, or a whydunit. Both are clear from the beginning. The question is how. The book gets to the answer by painting a study in contrasts.

The novel begins with a flashback. Thirteen years ago Jacobia Tiptree was a money manager in Manhattan, the mother of a 12-year-old son and wife of a brain surgeon. She made a lot of money, lived in a prewar building on Central Park West and drank 200-year-old wine.

But . . . the doc thought fidelity was just the name of an investment firm, and her son Sam was dabbling in drugs. Her clients have nicknames like “Da Bomb.” Then there was the guy who brought his son Steven into her office. Dad needed big money to pay off his loan shark. He leaves with $500 bucks to take the kid to a Yankees game.

She is so tired of it.

Getting from that point to the little town of Eastport Maine wasn’t easy, but she gutted it out. The present bright July morning finds her scraping the front porch steps—one of the many home repairs that has to be done during the very short summer. Her son is clean, and her second husband loves her wholeheartedly.

But . . . that stranger that bicycles past her house for the third time in a half hour is starting to creep her out. When he stops to chat, he seems vaguely familiar and his hostility unnerves her. It doesn’t take her long to remember Steven. But can that innocent kid turn this bad?

Ms. Graves ratchets up the tension and lets it loose again like the sails of one of Eastport’s vessels. Maybe, Jake thinks, this kid is no one; every July 4th this easternmost city in the continental U.S. becomes a destination for thousands of tourists. In a nod to its maritime history, Navy ships dock there for the celebration. Eastport really does it up, from fireworks over the water to parades.

But Jake has seen the malice in the stranger’s eyes and knows he means harm. Talking to the cops feels pointless; they have a thousand holiday details to oversee including the death of a young girl who’s fallen over the seawall.

Eastport’s busy summer contrasts with Jake’s feelings of isolation. Even with her family, dogs and friends she is being singled out. The beautiful sunny weather doesn’t seem so warm as cold evil slips in. The town’s determined frenzy for the holiday to be perfect is a foil for Steven’s overwhelming ambition to undermine it.

The bright-as-a-penny town has it’s darker aspects—the reason Steven isn’t caught is because he hides in one of the abandoned and crumbling sea captains mansions—far too expensive for the locals to keep up. The current happiness of Jake’s family is a mirror of this guy’s obsession with his ugly one. Jake has fought hard to understand that keeping up the pretense everything is fine doesn’t provide real comfort.

She needs help, and more importantly, can accept it. Will she be able to keep that faith? That emotion is an anathema to Steven. If he can make someone pay for his troubled past, his life will have been worth it.

There are a few bumps on the road to the dénouement. Jake’s vaunted brains are nowhere to be found at a critical juncture, which makes for a slightly unsatisfying ending. But Ms. Graves moves the story safely into port, and docks it comfortingly. The tang of sea air will comfort readers until the next visit to her much loved home.