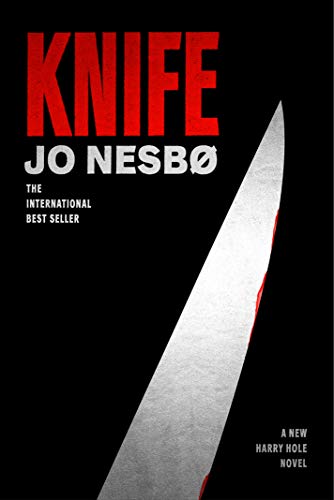 Knife by Jo Nesbo is dark and deep, a black hole of a story. Specifically, it is another story of Harry Hole, a soul from which no light or joy escapes. The story begins with action and terror. Then the plot becomes most impenetrable. Characters and subplots wind around themselves like thick vines in a primal forest. Little light penetrates the frequently long paragraphs. Strange flora, such as repeated references to Doc Marten shoes and IKEA products snag at the reader. What begins fast paced mystery ends with a seemingly unscripted roll of the dice.

Hole himself best summarizes his newest agony among the living: “I cannot control anything. I just want to find the man who killed Rakel. Then I’ll wake up. And die.”

Somehow, Hole has been able to return to the Oslo police force. His brain is still awash with alcohol. His body staggers between days of hangover and retching. His wife Rakel has kicked him out. Then she is murdered. Hole finds himself in the crosshairs of both psychological and literal guilt for her murder. Like Lady Macbeth from Nesbo’s novel of last year, Hole finds blood, which is not his own, on his hands. He has no memory of how it came to be there.

Knife has many actual knives glinting from its many, many pages. There are trails of blood and women rendered helpless before they fall victim to the worst of crimes in the dense prose forest. There is even a penis exploded by a special bullet fired from s sniper’s rifle.

Nesbo keeps Nordic mayhem fresh as winter slips to spring. He has not lost his touch for torturing Hole in this, the 12th installment the detective’s ongoing nightmare. Hole just cannot seem to wake up and die right.