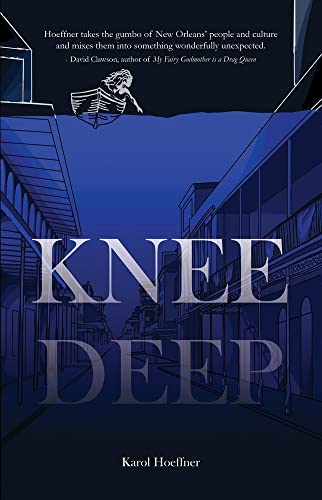 “Knee Deep lets itself be a story of solidarity, a tale about the glue that binds communities together, as told by the voice of a young one who, like us, the readers, is just waking up to so much.”

Slate Books and Culture Columnist Laura Miller writes, “As a book publishing phenomenon, young adult literature entered the decade like a lion. At the beginning of the 2010s, a generation that had grown up obsessed with Harry Potter and other middle-grade fantasy series decided it wasn’t that interested in adult literary fiction, with its often lackadaisical plotting and downbeat endings. YA stood ready to supply them with plenty of action, cliffhangers, supernatural beings, mustache-twirling bad guys, and true love. But now, at decade’s end, YA seems to be eating itself alive.”

Yes. Maybe. But also, maybe, many young adult books were (are?) badly written. What does that mean when talking about YA? Among other things, it means they don’t pull off the magic trick that is having adults write convincing stories about a time of life they no longer inhabit.

Is this to say that writers can only write well about the present? Of course not. But unknowing what you know is impossible. And sounding convincing when saying you don’t know what you know very well is not easy; a tricky balance at best. Try it. Say, “Really? I didn’t know” about anything you do know, and hear how fake it sounds. Doing it for 200-plus pages is a real feat. A magical talent.

Luckily, Karol Hoeffner, author of Knee Deep, is a talented magician. Set in Katrina-era New Orleans, her novel follows 16-year-old Camille Darveau around the Bayou just before, during, and after the storm that left almost 2000 people dead or missing just 15 years ago.

Camille, who is in love with her neighbor Antwone, he of the desirable girlfriend who calls herself M—. Yes, with a long dash and a period. Camille, she of the mixed race whose parents own a bar in the Quarter called The Cock’s Comb, as if high school needed any additional parentally-sourced humiliation. Camille of the purple-haired best girlfriend, and the resourceful and always fabulously appointed best gay friend. She is a normal teen in most respects, who speaks and acts her age and is only exceptional in her occasional ability to communicate with other worlds and in her constant ability to be self-aware and win our hearts.

Meanwhile, Knee Deep has “plenty of action, cliffhangers, supernatural beings, mustache-twirling bad guys, and true love,” but its plotting is anything but lackadaisical, its ending complex and not easily described (or spoiled), and it is exceptional because it is so very well written, no cheap tricks, no overwrought scenes, the aftermath of Katrina recognized as more than enough surrealism.

“By the time we left town, it was way too late to get out quick. The wind had picked up and a light rain began to fall. Traffic wasn’t too bad on surface roads, but when Mary Ellen pulled off Basin Street and merged onto the I-10, we slowed to a crawl. We joined a river of headlights streaming toward higher ground, leaving the city that care forgot. I was wedged in the back seat between what we had to take and what couldn’t live without. On my left were two gallons of water, an old metal suitcase of family mementoes, a bag of sweet potato fries, and Bama’s cooler full of crawfish. Don’t ask me why but nobody evacuates New Orleans in a hurricane without a goodly supply of seafood.”

Notice Camille doesn’t sound as if she were a middle-aged woman trapped inside a teenage girl’s body. I mean, she’s smart, but not that smart, escaping the YA trope of children spouting wisdom they are too young to have acquired, no matter how gifted. Here, all sources of hard won truths are properly credited, as in this passage:

“By the time I got home, it was early evening, around six, which according to my daddy, is the saddest hour of the day. He says people get depressed when the sun sets because they are thrown into a kind of purgatory: the transition between the death of a day and the birth of a night. He’s fond of pointing out that the cocktail hour was invented to ease that transition, to help people let go of the day’s worries so they could embrace the dark.”

But Camille does become wise in her own right. Katrina, New Orleans, and author Hoeffner see to that. It is done on the page where you can see it, be a part of it, wondering instead how any child who survived all that happened could have managed to remain a child, because, of course, they didn’t.

“We wandered down our street to our customary spot to wait for Rex. Everybody on our side of the street either knew each other or knew somebody who knew somebody. Everybody was asking the same question. ‘How did you do?’ And we all knew what they meant.

“‘The bus took me and my three children from the Dome to the Causeway where we spent two days on the overpass before they got us out,’ said a woman in oversized Mardi Gras glasses, corralling her three rambunctious kids.

“I remembered the faces of families I’d seen on the news after the storm, begging for water, for food, for someone to care, and imagined hers had been among them. And yet here she was today laughing with her kids.”

Knee Deep is not overly long, but it packs a lot. Racial justice, poverty, gender violence, gay rights, teen sex, identity, systemic corruption, managing to document Katrina’s path without hitting you over the head with any of it. It is a glorious background, but a background, one that enhances the teen story of love and loss and redemption at its center, and allows only one character to completely steal the show: the city of New Orleans.

“The next morning, I took the bus to the Salon Batiste, which had recently reopened with the return of its owner. As I waited my turn in her chair, and elderly lady with silver braids twisted into bantu knots said, ‘Everybody I’ve talked to who’s come back to New Orleans can point to that one thing turned them back around. What called you home, honey?’

“Aisha’s older sister, who owned a big old house near the bird preserve on Sanibel Island, had urged her to stay, but gradually a deep longing took hold, something stronger than even fear.

“It was all about the gumbo. I mean I could get okra in Florida. Tomatoes, too. And seafood was plentiful. But I had to drive thirty-six miles to find me some Andouille sausage. And nobody seemed to think that was a problem,’ Aisha said, smiling and turning her attention to me. “But the real reason I came back is Camille. Look at this child’s hair.’”

In this way, Knee Deep lets itself be a story of solidarity, a tale about the glue that binds communities together, as told by the voice of a young one who, like us, the readers, is just waking up to so much.