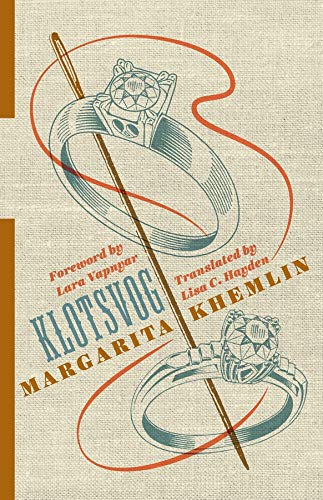 “Khemlin has created an unforgettable character and opened a window onto a world more people should know about.”

The narrator of Klotsvog opens the book by introducing herself: “My first name is Maya. Patrinymic Abramovna, maiden name Klotsvog. . . . I was born in 1930 and—like my whole generation—saw too much, things that weren't pretty.” This blunt beginning sets the tone for all that follows.

Maya is a self-absorbed woman traumatized by the events of WWII and the crushing anti-Semitism of the Soviet Union. Living in the Ukraine, Maya doesn't describe the horrors she survived during the war. Instead the entire book follows her as she feels the effects of the lies she herself constructs.

An attractive young woman, Maya falls in love with Viktor, one of her teachers. The handsome teacher is married, however, and his wife accosts Maya, explaining why their relationship is doomed: “You're Jewish and your children will be half Jewish. And you yourself know what the situation is now. You read the papers, listen to the radio. And then that shadow would fall on Viktor Pavlovich himself, too. Anything can happen. Don't you agree? Babi Yar over there is full of half-bloods.”

It's a chilling threat but one that young love predictably ignores. Maya gets pregnant and when her lover won't leave his wife and marry her, Maya decides the best strategy is to marry someone else. Everything that happens after this fatal decision is tainted by this lie. Maya manipulates, plots, contorts herself to make sure the son who is born never knows who his true father is.

She does have a conscience, however, and in a brief, telling scene, she tries to make amends to people she's used by bringing them a Kiev torte. When she can't find them, she's relieved to be saved from her “momentary weakness,” freed from her past. “Mama had carried my past life with her to a deep grave. And it was time to put the matter to rest.” She eats the torte herself.

Maya isn't an appealing character. She's far too vain and self-absorbed for that, but her voice draws the reader in, introducing us to a Jewish culture that is wounded, trying desperately to recover and maintain some dignity in a country that despises it. Maya is a survivor, keen on rooting out any trace of Jewish taint. She isn't close to any of her family members but relies on her mother to raise her young son for the first years of his life. When the boy comes to live with Maya, now aged five, Maya quickly tries to root out all the Yiddish (called “Jewish” in the novel) sprinkled in his conversation. She knows for his own comfort and safety he needs to pass as Russian. Being identified as a Jew can only bring trouble.

Klotsvog isn't an easy story, but Maya is a brilliant character. Not just an unreliable narrator, she's an unreliable person, someone raised in hunger and fear who is desperate to find a comfortable place in the world. Khemlin has created an unforgettable character and opened a window onto a world more people should know about.