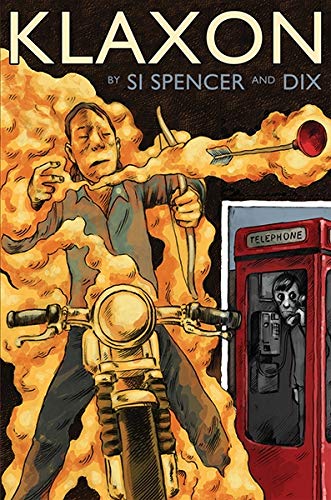 “Never has wading through the bizarre been so rewarding.”

Where to start with Klaxon?

The best place to start is with the fact that this graphic novel is not for everyone. Surreal, bizarre, terrifying, hilarious, confusing, disgusting, gorgeous. It runs the gamut of emotions and thoughts. Klaxon is a horror graphic novel where the horror seems to seep directly off the pages and into the reader’s psyche as opposed to spelling it out in wide swathes of blood and gore. In fact, there is more falling candy than dripping blood, more breaking of plaster than breaking of bones.

It is a very strange graphic novel. And one so brilliant it takes a while to decompress and see just what the story is and what the author is trying to say.

Centered around Carlisle, a slacker who pretty much has lost all motivation to do anything except sit around with his two other slacker roommates, the story picks up when new neighbors move in next door. A mother, a daughter, and sisters? (still not sure on that one), the new neighbors are instantly set upon by their abusive landlord and his henchman of a son.

Despite the surreal narrative, Klaxon is a simple story of abuse and retribution. It is a hero’s journey, forcing Carlisle to get up off his ass and do something to help the depressed and victimized new neighbors. He must deal with some bizarre characters to complete his transformation, such as a dreamstate, TV wielding fancy boy, who also appears later dressed like an eight year old from the 1950s and really, really likes cowboy movies; his own slacker roommates that seem to feed off their own sarcasm and are addicted to candlewax and wall insulation; and Mr. Stapleton, the landlord, and his obviously disturbed and very abused son.

The illustrations by Dix, a comic book artist and illustrator who has done work for The Guardian, are filled with soft and doughy characters framed by wriggly and unstable panels whose borders are thick white, forcing the reader to focus on each and every image.

Dark, dirty, and filled with squalor, each and every panel is a testament to the spirit of the strange and horrible tale being told. Dix manages to impart a feeling of discomfort while also keeping things intimate, never letting the eyes drift or stray. Unsettling and beautiful, the pages draw the reader in and hang on tight, making sure stomachs twist and throats gulp.

As stated previously, Klaxon is not a graphic novel suited for everyone. It should not be a novice’s entree into the world of sequential art. But for those who are looking for narrative and illustrations that stray well outside the norm, this graphic novel is perfect. Despite its very surreal nature, the story is straightforward and satisfying. A read well worth the effort. Never has wading through the bizarre been so rewarding.